It's easy to find outlawed weapons on sale at UK arms fairs - unless, it seems, you are Customs
Mark Thomas
Wednesday August 8, 2007
The Guardian 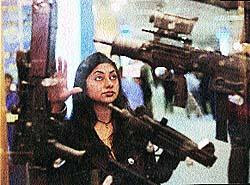 One of the quirky tools at the disposal of a British bureaucrat is the licence. We seem to license everything from watching television and fishing to parking in front of our houses. So it is entirely in keeping that if you wish to sell missiles to dictators in the developing world, you will need a licence. Unfortunately, these licences are numbered (ML 6, for instance, is a military vehicle), so civil servants will never be heard inquiring of their colleagues, "Anyone got a spare Guns for Despots licence form? I've run out."

So it was that when New Labour outlawed the sale of torture equipment from the UK, they did so via a licence. Electro-shock batons, called the torturer's tool of choice by Amnesty, are now classified as "restricted" and are legally on a par with nuclear weapons and long-range missiles. You can apply for a licence to sell all of these, but it is unlikely you will get one - though the image of someone from al-Qaida stuck in a post office queue clutching a nuke application form is a captivating one.

The UK law is strict: it is illegal to do "any act calculated to promote the supply or delivery" of electro-shock. New Labour have done for the arms trade what the black rat did for the plague, but "restricting" the sale of torture equipment is one of the few decent things they have done. The problem is getting Customs to take this law seriously.

The 2005 Defence Systems and Equipment International arms fair in London's Docklands was described as the "hi-tech" end by the organisers, Reed Elsevier. "It is all very different," observed the Telegraph, "from the bad old days when electric-shock batons were quietly flogged to men in sunglasses from repressive third world regimes." Except it wasn't. I found three companies offering electro-shock torture equipment. One, Tar Ideal, was even offering an electro-shock spray.

Being a civic-minded sort of a chap, I contacted the Guardian, which ran the headline: "Banned stun guns and leg irons advertised at arms fair." I reported it to Customs and ended up giving evidence at a parliamentary select committee. The committee asked: Why did a comic find this stuff? Why didn't Customs spot them? Why didn't the police, or other officials, or the fair organisers?

The select committee's report yesterday, like the earlier report in 2006, urged Customs and arms fair organisers to pay more attention to torture weapons being offered for sale. Unfortunately, the organisers of the 2007 Birmingham police and security fair weren't paying much attention. In the middle of the hall was Mr Xia, a Chinese man with three electro-shock weapons on display for all to see. He demonstrated them for me while I filmed him. A bargain at £3.25 each. At least, I thought, it shouldn't be hard to find a cop at the police and security fair.

How foolishly naive. The Association of Chief of Police Officers had a stall around the corner from Mr Xia, but with no one there. The nearest Customs officer, I was told, was at the airport. The closest thing I found to an on-duty officer were two life-size cardboard cutout cops, on sale as a deterrent to thieves. Eventually, I found the fair organiser's office.

Mr Xia was arrested, and two weeks later I got a phone call from Solihull CID. "Mr Xia has pleaded guilty to the possession of prohibited firearms," said the voice, "but I think it is illegal to try and sell these weapons."

"You would be right."

"And I think Mr Xia was trying to sell them."

"Would you give us a statement and let us see the film you shot at the fair?"

"And one more thing - if you wouldn't mind, could you bring up copies of the relevant legislation?"

Despite seeing the film of Mr Xia offering to sell these weapons, the Crown Prosecution Service decided not to press charges and he was deported. So what does it take to get Customs, the CPS and the cops to take this seriously? I'm not sure, but as a favour to Customs I am going to give it the heads up on a bit of naughtiness it could spot at the arms fair in London in September. If everyone who says they are coming to the fair does turn up, it looks as if, once again, we could have a UK citizen involved in electro-shock torture equipment. Someone Customs would have a legal right to nab. So let's see if Customs spots them. Let's see if this time they can do their job. Happy hunting, folks.

· Mark Thomas is a comedian and political activist, and author of As Used on the Famous Nelson Mandela: Underground Adventures in the Arms and Torture Trade