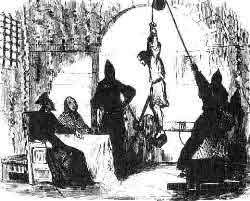 Perhaps the CIA reasons that its victims should be as mentally impaired as most agents, ala Tim Weiner.

WASHINGTON, Aug. 3. — Interrogation techniques used by the CIA on alleged terrorists can cause serious mental damage and are illegal in the United States, according to a report released Thursday by two non-governmental organizations, Physicians for Human Rights and Human Rights First.

The report, titled "Leave No Marks, ‘Enhanced’ Interrogation Techniques and the Risk of Criminality," was drafted by medical and legal investigators from both groups and based its conclusions on extensive medical documentation and various cases of torture survivors.

Researchers analyzed CIA techniques, which include sensory and sleep deprivation, exposing prisoners to excessive heat and/or cold for long periods, placing prisoners in "stress" (extremely uncomfortable) positions, sexual humiliation and simulated drowning of prisoners via a technique known as "water-boarding."

The report found that these practices can cause long-term consequences such as post-traumatic stress disorder, psychosis, substance abuse, and suicide, and for that reason are illegal, the AP reported.