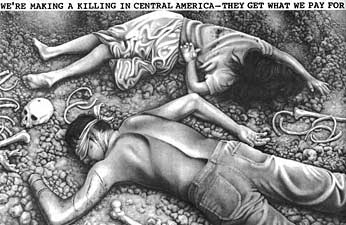 The decision upholds a 1988 injunction mandating that immigrants be advised of their rights to asylum and legal representation.

The U.S. government has violated its own immigrant detention standards, denying some Salvadoran detainees access to legal materials, telephones and attorney visits, a federal judge in Los Angeles has ruled.

District Judge Margaret M. Morrow upheld a 1988 injunction mandating that Salvadorans be advised of their rights to apply for political asylum and have access to legal representation.

In her July 26 decision, Morrow ruled that because detention standards weren't always followed, the injunction must remain in place so Salvadorans could "exercise their right to apply for asylum freely and intelligently."

Although the case was filed on behalf of Salvadorans fleeing civil war in the 1980s, the injunction — and the recent ruling — affects all detained immigrants by highlighting the problems that exist at holding facilities across the nation.

"The government needs to do more to ensure that detained immigrants have basic rights to due process," said American Civil Liberties Union attorney Ranjana Natarajan, one of the lead attorneys for the plaintiffs.

The Department of Justice plans to appeal the decision.

"We are disappointed that the court continues to refuse to end a long-standing and unnecessary injunction," Department of Homeland Security spokesman Russ Knocke said in a prepared statement. "The civil war in El Salvador ended several years ago. Circumstances there that were the basis for the injunction no longer exist."

Knocke said that U.S. border security was more critical than ever in a post-9/11 world.

The federal injunction was issued nearly two decades ago after Salvadoran refugees accused the former Immigration and Naturalization Service of using threats and coercion to discourage them from applying for asylum.

In 2005, the Department of Justice filed a motion to end the injunction, arguing that the government had adopted procedures to ensure that detainees weren't coerced into giving up their rights. The department also argued that the situation in El Salvador had changed significantly and that Salvadoran immigrants did not deserve special treatment.

But immigrant advocates argue that many Salvadorans still have valid asylum claims and need to be informed of their rights.

"The injunction was not only based on the war in El Salvador but also on the treatment of people with valid asylum claims by the immigration authorities," said Linton Joaquin, executive director of the National Immigration Law Center, and one of the lead attorneys on the case.

Joaquin also argued that the injunction needed to continue because the detention standards that the government enacted were not enforceable — and were routinely ignored.

"There are violations all over the place," he said.

In the decision, Morrow referred to reports by the Department of Homeland Security's Office of Inspector General, Immigration and Customs Enforcement, the United Nations and the American Bar Assn. about detention conditions. She concluded that the government's analysis "understated — perhaps severely — violations of the standards at the various detention centers."

Morrow wrote that the government adopted new regulations to ensure that immigrants weren't deported unless they understood their right to asylum, but authorities didn't always follow those regulations. She cited one study showing that fewer than 10% of immigrants at the San Ysidro port of entry were advised of their right to apply for asylum.

The judge also noted that some centers lacked computers or had outdated or missing legal materials. At others, the phones were out of service for long periods of time or the calls were cut off abruptly.

On one day in April 2005 at a San Diego facility, for example, 13 of the 60 phones in the detainee visitor area did not work. And even though the government's detention standards required facilities provide private rooms for legal visits, that did not always happen.

Luis A. Hernandez of the Assn. of Salvadorans of Los Angeles said he was pleased by the ruling. There is not a civil war anymore, but Salvadorans continue to flee the country for their safety — often because of gang violence, he said.