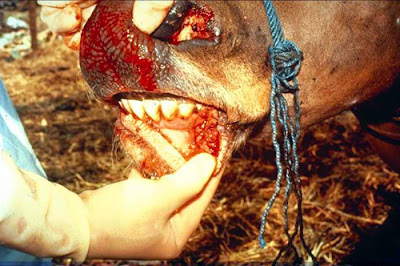 An accidental leak of an experimental vaccine from a private research site was being investigated urgently last night as the likely source of Britain's new foot and mouth disease outbreak. The news came as the government attempted to avert a full-scale crisis in farming and the tourism industry.

Movement of all livestock has been banned, exports to Europe stopped and country fairs cancelled to minimise the risk of the country suffering a disastrous rerun of the 2001 foot and mouth epidemic which cost the nation £8.5bn.

Scientists made a breakthrough last night as they identified the strain of the virus as one which is not naturally occurring, but is a vaccine strain, and has never been seen before in Europe. This enabled investigators to link the outbreak to a company which lies less than three miles down the road from the source of the outbreak.

Merial Animal Health, a private pharmaceutical firm shares facilities with a government laboratory in Pirbright, and is commissioned by the European Union to formulate new vaccines for animal diseases. Both companies are expected to meet tight regulatory standards for biosecurity.

Investigators are now focusing on whether there was a lapse which meant that a batch of the vaccine, made last month, escaped the site. The company is believed to test its vaccines on animals, which may have been able to graze on the land. The virus may have been carried by the wind, or by people or vehicles down the road from the site to a rented field in the village of Normandy, near Guildford, where the outbreak happened.

By last night, dozens of vets and farm officials had been sent into a 10km 'surveillance' zone around the outbreak centre at Woolfords Farm to start disinfecting equipment and vehicles, as well as testing sheep, cattle and pigs from other farms. Hundreds more cattle, sheep and pigs in the zone face slaughter amid fears that they may have been infected by an airborne strain of the virus escaping from a nearby research centre.

The news that this may be an isolated outbreak, caused accidentally because of human error, will come as a relief to many farmers, because it makes it far less likely that the disease has already begun to spread around Britain. It also alleviates fears that the disease could somehow have made its way into the animal food chain, as happened in 2001 when it was found to be contained in pigswill.

The fact that it is a vaccine strain - called 01 BFS67 - also means that the infected animals are likely to have had a more mild form of the disease, and are much less likely to be contagious to other cattle.

At a press conference in London, the government's chief veterinary officer, Debby Reynolds, said one of her first acts was to review biosecurity at Pirbright.

She said earlier in the day, before the strain was known, that the government was 'focusing on all possibilities: legal, illegal, lab-based, deliberate release - all those possibilities will be investigated and I wouldn't want to put any undue emphasis on any of those'. A few potential cases had been reported in the wake of the discovery of infected cattle, some of which had already been found to be negative while others were still coming in, she added.

Yesterday Prime Minister Gordon Brown and the environment secretary, Hilary Benn, broke off their holidays to hold two emergency Cobra meetings to discuss the outbreak. Brown signalled his determination not to close off the countryside - which happened six years ago in the epidemic that ended in the slaughter of some 10 million animals.

A spokesman for Merial Animal Health said last night that it would co-operate fully with the government inquiry 'to determine the source of the disease'. The company has agreed to voluntarily halt vaccine production. 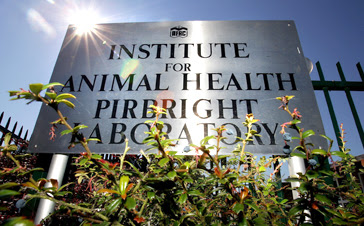 Workers began culling infected cattle from Woolfords Farm where farmers were first told by vets on Thursday night that the herd might have foot and mouth. 'We will be doing, night and day, everything in our power to make sure that what happens happens quickly and happens decisively in a way that can reassure people that everything is being done,' said Brown.

Conservative leader David Cameron also postponed his holiday in Brittany, France, to talk to farmers in his Oxfordshire constituency.

Richard Macdonald, head of the National Farmers' Union, said the news was 'pretty devastating' but praised Defra's quick response. He appealed to farmers to help contain the disease.

The case at Woolfords is the first in Britain since 2001, when the epidemic led to animal carcasses being burned on pyres countrywide. This time, ministers have decided, there will be no pyres. The bodies of the first infected cattle were sent instead to an incinerator.

Tomorrow, the European Commission will decide what steps to take to limit any spread of the disease, but an automatic ban on livestock imports from the UK is now in place, under trade rules. An emergency meeting will be held in Brussels to look at restrictions on movement of animals and dispatch of food products from the UK.

In the heart of the 10km surveillance zone is Oxenford farm, between Elstead and Milford, close to Pride's home. Yesterday, the owners were waiting for news about what would happen to their livestock. Meanwhile, farmers were urged to look for symptoms in their animals, which include shivering, lameness and blisters on the foot and in the mouth.