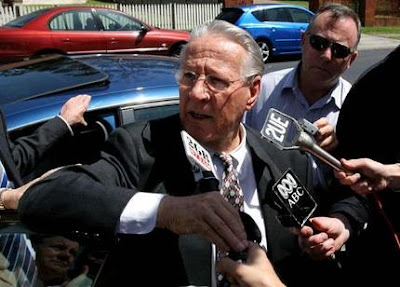 A FORMER Sydney MP who raised sex abuse allegations against a cult leader a decade ago says it is a shame he will never be brought to justice.

Stephen Mutch, former federal member for Cook, said Ken Dyers had taken "the coward's way out" by taking his own life last Wednesday.

Dyers, 85, the founder of the healing cult Kenja Communication, was committed last year to stand trial on 22 charges of aggravated indecent and sexual assault upon two 12-year-old girls. He was arrested in 2005.

The trial was deferred after the NSW District Court deemed him unfit for trial in May and ordered a mental health assessment. Supporters of Dyers have taken out a full-page advertisement in The Sunday Age and other papers mourning his death and protesting his innocence.

Dyers' wife and co-founder of Kenja, Jan Hamilton, said the ad was taken out by "angry and upset individuals" who were frustrated that her husband's case had not been accurately portrayed in the media.
----------
http://www.religionnewsblog.com/18919/kenja-5

As family and friends bade final farewells yesterday to Kenja founder Ken Dyers, controversy continued to rage over the alleged child sex claims which led to his suicide.

The father of one of his alleged victims hit out at weekend newspaper ads claiming the 85-year-old was incapable of committing the child sex offences levelled against him.

The 50-year-old man, who cannot be named because it would identify his daughter, contacted the Leader yesterday to denounce the contents of the full-page advertisement which the cult placed in Fairfax newspapers.

Kenja said in the advertisements that Mr Dyers took his own life because he could no longer endure the anguish of child sex allegations.

In 1993, Mr Dyers was charged with 11 counts of sexual assault, but was later cleared of 10 charges.

The Kenja ads said fresh accusations brought by the daughter of Mr Jones (not his real name) and another 12-year-old girl were the final straw for the war veteran.

“These charges, had they ever gone to trial, would not have survived. Ken was in his 80th year at the time [the offences] … were alleged to have occurred. The suggestion that he was in any position to molest young girls is simply untenable,'’ the advertisement said.

But Mr Jones said he believed “implicitly'’ in the allegations made by his now 17-year-old daughter.

Born to parents who were staunch members of the cult organisation, the teenager was destined for Kenja exposure. But the family of five cut all ties as soon as she made the allegations, Mr Jones said.

Her claims were the catalyst for research into a man he and his wife had known and trusted for more than two decades. Inquiries led to a number of former families who, over the year, “had suddenly left'’ Kenja, he said.

He found a number had left under similar circumstances to his own, “but none of them will speak out'’.

Mr Jones said his family was entrenched in the “organisation'’ and spent many hours a week attending lectures and “processing sessions'’ at the Surry Hills headquarters, where the alleged abuse occurred.

The family’s sudden departure and the toll of court proceedings contributed to the Jones’s marriage breakdown.

The cost was also personally devastating for his daughter.

She had been unwillingly estranged from friends whom she had known all her life. She sank into depression.

“She was a young girl and all her friends were in [the cult]. Friends are incredibly important in a young girl’s life,'’ Mr Jones said.

She also suffered post-traumatic stress, struggled with her studies and initially displayed a classic symptom of victims of molestation, he said.

“They go through rituals to cleanse themselves long, hot showers and white towels.'’

Four years on, she continues to build a new life surrounded by new friends and one day wants to become a child psychologist to help victims of abuse.
http://www.theage.com.au/news/national/cult-leader-wont-face-justice/2007/07/28/1185339333767.htm
Posted by Alex Constantine at Friday, August 03, 2007