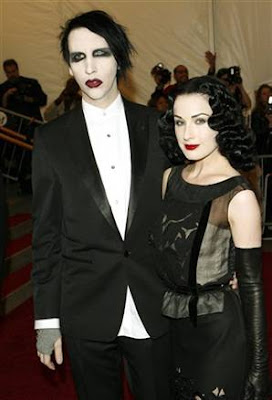 Shock rocker Marilyn Manson is being sued by a bandmate for using their earnings to buy Nazi paraphernalia, African masks made of human skin, the full skeleton of a 4-year-old Chinese girl – and ex Dita Von Teese's $150,000 engagement ring.

The 24-count, 96-page breach-of-contract complaint, filed by founding Marilyn Manson keyboardist Stephen Gregory Bier Jr. in Los Angeles, alleges that Manson, 38, commingled his own money with that of the band’s merchandising and touring companies despite a 1993 partnership agreement.

"Because of Manson and others' fraudulent conduct, Bier has spent almost two decades working for one of the world's most popular rock bands, that has made millions of dollars in profit, and now had almost nothing to show for it," says the complaint, which seeks unspecified general, compensatory and punitive damages as well as lost salary, bonuses and attorneys' fees, which Bier "believes to be in excess of $20 million."

A representative for Manson, whose real name is Brian Hugh Warner, did not yet respond to a request by PEOPLE for a comment.

According to the suit, band money also paid for Manson's collection of Nazi artifacts, including "SS typewriters, swastika wall tiles he had installed in his home library ceiling with custom rugs made to match and Nazi government coat hangers owned by Adolf Hitler."

Manson is also accused of buying a handbag that once belonged to Hitler's mistress, Eva Braun, which he later gave to his then-fiancée (and now estranged wife) Dita Von Teese, and collecting taxidermy models of animals, including a California grizzly and two baboons, as well as the "full skeleton of a 17th-century male in a wheelchair," for a collection in his Chatsworth, Calif., home.

The suit goes on to say that Manson, whose albums include Antichrist Superstar, systematically forced out the band's original lineup – in one instance by dousing the drummer's kit with butane and setting it on fire while he was still playing.

The complaint also accuses the singer of spending the money on his drug habit and the production of his upcoming film, Phantasmagoria: The Visions of Lewis Carro
Posted by Alex Constantine at Sunday, August 05, 2007