How Rupert Murdoch Steered the New York Times to the Right 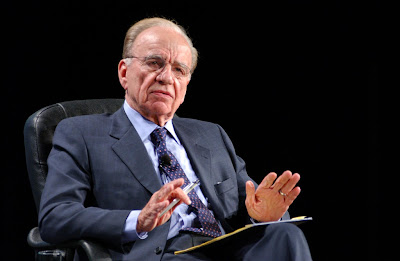 BOYCOTT FOX NEWS - THE CABLE SYSTEM IS AN AUTHORITARIAN PROPAGANDA VEHICLE. IT IS WORTHLESS AND EXPENSIVE AND IT CAN'T HOLD A CANDLE TO THE INTERNET, WHERE FOX IS A SMALL SPLASH IN A BIG OCEAN AND IS EASILY IGNORED. DO YOURSELF AN IMMENSE FAVOR: CUT THAT CABLE AND SEND FOX A MESSAGE THAT NAZI PROPAGANDA IS UNACCEPTABLE FAMILY FARE. DON'T SUBJECT YOUR KIDS TO NAZI BRAINWASH. CUT IT. - AC
--
http://www.juancole.com/2005/10/rupert-murdoch-and-judith-miller.html

The extraordinary exchanges between New York Times editor Bill Keller and reporter Judith Miller over her role in the Plame scandal and reporting on non-existent weapons of mass destruction in Iraq have suggested to me a wider context of the entire matter.

The wider context is that Rupert Murdoch, and Richard Mellon Scaife, and other far rightwing billionaires have deeply corrupted our information environment. They are in part responsible for what happened at the NYT.

Miller attempts to excuse her shoddy reporting on Iraq's imaginary weapons of mass destruction by saying that "everyone" got that story wrong. But the State Department Intelligence and Research Division did not get it wrong. The Department of Energy analysts were correct that the aluminum tubes couldn't be used to construct centrifuges. Elbaradei of the International Atomic Energy Commission was not wrong. Imad Khadduri, former Iraqi nuclear scientist, was not wrong. "Everybody" got it wrong only in the sense that "everybody" had been brainwashed by Rupert Murdoch.

' His Fox News was singled out for criticism because of its blatantly one-sided coverage of the war in Iraq and for printing unsubstantiated stories about the conflict. When CNN reporter Christian Amanpour blamed Fox for creating "a climate of fear and self-censorship" regarding coverage of Iraq, a Fox spokeswoman shot back, "Given the choice, it's better to be viewed as a foot soldier for Bush than a spokeswoman for al-Qaeda." Said Murdoch of the war, "The greatest thing to come out of this for the world economy, if you could put it that way, would be $20 a barrel for oil. That's bigger than any tax cut in any country." '


Gee, we got $60 a barrel oil instead. You wonder how someone so stupid got to be so rich (hint: stabbing people in the back is more lucrative than canny market research).

So here is how Murdoch and Fox and the Right in general tie into the NYT scandal. They stalked the Times. If you lexis Fox "News" transcripts and the NYT in the period between September 11 and the Iraq War, you find a constant stream of attacks. Brit Hume even waxed wrathful that the Times urged Tiger Woods not to play golf on a course at a club that excluded women.

'In the "Unresolved Problem" segment tonight, according to "The New York Times," some American diplomats are outraged that the USA is denying visas to young Muslims overseas. The "Times" reporter was extremely distraught by this. That's is no surprise since a new study by Center for Media and Public Affairs says that "The Times" and network news, as we mentioned in the "Talking Points" memo, skew against President Bush in his view of Iraq. '


But the big attack on the Times was in summer of 2002, when it was accused of paying no attention to Ahmad Chalabi and others who were alleging Iraqi weapons of mass destruction programs. It was even blamed for for Bush Senior National Security Adviser Brent Scowcroft not liking the idea of an Iraq War (Fox News Sunday, Aug. 25, 2002):


' CHARLES KRAUTHAMMER, FOX NEWS CONTRIBUTOR: It's a question here also of timing. I'm not sure the administration really wanted to have the debate heat up in August. This is not the administration directing the pace of this debate. It was the opposition who, after eight months, after all the president launched all this in his State of the Union address when he talked about the axis of evil and emphasized Iraq, it's the opposition that has now seized the day and made its case, starting with the Scowcroft piece and the assist from the New York Times. '


I spoke last year about the attack Andrew Sullivan launched in Murdoch's London Times on NYT editor Howell Raines for not cheerleading Bush's building Iraq War. Sullivan had been especially incensed that the NYT gave no credence to the Iraqi expatriates on the nuclear issue.

So in this polluted information environment, in which Howell Raines's view of reality, which was perfectly correct, was constantly pilloried by powerful rightwing media as nothing short of treason, there was every incentive to give Judith Miller her head. Remember that the NYT is a commercial publication. All major newspapers were seeing their subscription base shrink. After September 11, the country had moved substantially to the right on national security issues. The Times could easily go bankrupt if it loses touch with the sentiments of the American reading public. There is a lot at stake in the Murdoch et al. assault on the NYT. In its absence, the information environment in the US would be even more rightwing. I've even rethought my own rash response to its editorial on the Columbia Middle East studies issue last spring.

The NYT had no sources to speak of inside the Bush administration, a real drawback in covering Washington, because it was a left of center newspaper in a political environment dominated by the Right. Miller had sources among the Neoconservatives, with whom she shared some key concerns (biological weapons, the threat of Muslim radicalism, etc.) So she could get the Washington "scoops." And her perspective skewed Right in ways that could protect the NYT from charges that it was consistently biased against Bush. Of course, in retrospect, Bush's world was a dangerous fantasy, and giving it space on the front page of the NYT just sullied the Grey Lady with malicious prevarications.

I have been told that Miller was also important in hiring decisions, and she probably created her own base of clientelage among new hires over time. It has been alleged to me that senior neo-conservative-leaning reporters at the Times at one point blocked the hiring of an Arab-American reporter. I have this from a single source and cannot be sure it is true, and cannot be sure that Miller was part of it if it was. But that she could affect the careers of her colleagues at the paper does seem clear and helps explain why even those critical of her had to tread lightly.

The Blair scandal was red meat to NYT critics and the whole rightwing Sound Machine. I suspect that for the paper to face the Miller problem at that moment in 2003 might have seemed fatal to its credibility on the parts of Keller and owner Sulzberger. And, there are rumors that Miller had Sulzberger wrapped around her pinky.

So Bill Keller comes on board. And there are these complaints about Miller

So this is the larger context of Keller's recent remarks:

' First, I wish I had dealt with the controversy over our coverage of WMD first thing upon becoming executive editor. At the time, I thought I had compelling reasons for kicking the issue down the road. The paper had just been through a major trauma, the Jason Blair episode, and needed to regain its equilibrium. It felt somehow unsavory to begin my tenure by attacking the previous regime. I was trying to get my arms around a huge new job, appoint my team, get the paper fully back to normal, and I feared the WMD issue could become a crippling distraction. So it was a year before we got around to really dealing with the controversy. At that point we published that long editor's note acknowledging the pre-war journalistic lapses, and -- to my mind at least as important -- launched a body of aggressive reporting aimed at exposing how bad or manipulated intelligence had fed the drive to war. (I'm thinking of our excellent investigation of how those infamous aluminum tubes became a supposed smoking gun, the report on how the Iraqi National Congress recruited exiles to promote the notion of Saddam's WMD threat, our close look at the military's war-planning intelligence, and several other pieces. Critics sometimes overlook the fact that lot of the best reporting on how this intel fiasco transpired appeared in the NYT.) By waiting a year to own up to our mistakes, I allowed the anger inside and outside the paper to fester. Worse, I fear I fostered an impression that The Times put a higher premium on protecting its reporters than on coming clean with its readers. If I had lanced the WMD boil earlier, I suspect our critics -- at least the honest ones -- might have been less inclined to suspect that, THIS time, the paper was putting the defense of a reporter above the duty to its readers.

Second, I wish that when I learned Judy Miller had been subpoenaed as a witness in the leak investigation I had sat her down for a thorough debriefing, and followed up with some reporting of my own. It is a natural and proper instinct to defend reporters when the government seeks to interfere in our work. And under other circumstances it might have been fine to entrust the details -- the substance of the confidential interviews, the notes -- to lawyers who would be handling to case. But in this case I missed what should have been significant alarm bells. Until Fitzgerald came after her, I didn't know that Judy had been one of the reporters on the receiving end of the anti-Wilson whisper campaign. I should have wondered why I was learning this from the special counsel, a year after the fact. (After the initial leak to Robert Novak in 2003, we asked the Washington Bureau to ask our correspondents whether any of them had been offered similar leaks. As we reported last Sunday, Judy seems to have misled Phil Taubman about the extent of her involvement.) This alone should have been enough to make me probe deeper. '

In essence, Murdoch, Scaife and other far rightwing super-rich propagandists succeeded in maligning the NYT and in pushing it off its liberal perch even further to the Right. In trying to defend themselves from the charge of treason, Raines and Keller fell into the trap of using Miller's shoddy reporting as a rampart. In the end, it was revealed to be not a rampart but a Trojan Horse for the Right.
Posted by Alex Constantine at Sunday, August 05, 2007