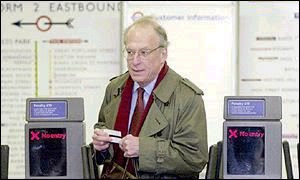 Ken, his crony, and a row over a drunken interview
Independent
15 June 2007

In a clinic in the United States, an ex-CIA agent is receiving treatment for alcohol addiction, an illness that may have its origins in a dreadful tragedy that befell his family years ago.

Bob Kiley might sound like a suitable case for public sympathy but sympathy has been noticeably lacking in the questions about him directed at London's City Hall this week. Because Mr Kiley, 72, is not just an alcoholic, he is also one of Britain's highest-paid public servants.

When he ceased to be a full-time commissioner, he was paid £2m in a severance deal and retained as a 90-day-a-year consultant for Transport for London (TfL) with a daily fee of £3,200, giving advice on issues such as Crossrail and the Olympics.

This week, the London Mayor, Ken Livingstone, who hired Mr Kiley six years ago, felt compelled to say that the generous flow of Londoners' money into Mr Kiley's current account would have to stop. The Mayor has tactfully suggested that Mr Kiley will have the good sense not to submit an invoice until he is well again.

The Mayor made this announcement with obvious reluctance, accompanying it with a glowing tribute to all that Mr Kiley has done.

But some people have wondered whether there is anyone who is paid so much out of the public purse to do so little. In an interview in March with the London Evening Standard Mr Kiley admitted that his intake of vodka went up as his workload went down. "If you ask me what I actually do to earn my consultancy, I'd have to tell you, in all honesty, not much," he said.

Mr Kiley has since stressed that he did not mean this remark to be taken seriously. Mr Livingstone claims that he was drunk when he said it. "I deplore that someone having a problem with alcohol is used by the media as he was," he said.

Mr Kiley has hinted that his drinking relates to the shock he endured many years ago when his wife of 15 years and their two sons, aged three and five, were killed in a multiple collision near New York. He pulled through by immersing himself in work, running the Boston subway system and overhauling the New York subway, spending $9bn (£5bn) on improvements.

Educated in Indiana and at Harvard Graduate School, he led a CIA-funded student group before he joined the organisation in 1963. He rose to be executive assistant to the director, Richard Helms, who received a suspended prison sentence for lying to Congress about the CIA's operations abroad. Mr Kiley went into transport management in 1970.

Mr Kiley oversaw the introduction of the London congestion charge, which is being studied by other big cities around the world.

There are 10 million Oyster cardholders. More Londoners than ever are cycling and there are 40 per cent more bus passengers. He also succeeded in securing the right to borrow huge sums to invest in transport. The quality of London's transport infrastructure was one of the factors that secured the success of the 2012 Olympics bid.

But success has come at vast cost, according to Mr Kiley's critics. Annual bus subsidies have risen from an average of £32m to an average of £428m. And it emerged this week that in the last financial year TfL spent £222m on consultancy fees. On top of that, there is the money spent on Mr Kiley. His next fee, of £146,250, is due on 1 July. It is not likely to be paid.