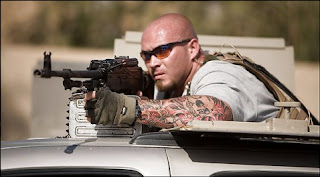 "Our company was founded in Chicago in 2003 by U.S. Army Special Forces veterans. We established operations in Iraq in 2004 following the first of multiple contract awards in the region. In 2005, our corporate headquarters relocated to Herndon, Va., just outside Washington, D.C. ..."
http://www.triplecanopy.com/triplecanopy/en/about/

"Barrett Moore, founder of a private disaster response firm seeking tax breaks to establish operations in northern Michigan, has acknowledged for the first time that he lied about his military service and was once convicted of criminal fraud in Australia. ... "

" ... Moore, as founding chief executive officer of the private military contractor, Triple Canopy, has lied so brazenly about his own military service and business success? Or the fact that neither our government nor his financial backers and business associates along the way had done the research that would have uncovered those lies? Why wasn’t he caught before, either by the State Department doing due diligence in investigating those to whom they award contracts or by the state of Michigan as it sought to bless his business with tax breaks? These failures speak volumes about the lack of accountability in a political system that distributes vast amounts of our tax dollars every year. ... "

Two former employees of an American private military contracting firm have claimed in a Virginia court that they saw their supervisor deliberately shoot at Iraqi vehicles and civilians this summer, and that the firm fired them for reporting the incidents.--source

No, that's not Blackwater. That's a November 2006 article about Triple Canopy. This comes after CNN's April announcement that the Triple Canopy would be taking over the Blackwater/Xe contracts, due to Iraq refusing to renew their operating license due to a September 2007 shooting incident involving five of their then-employees.

Yet another example of the Obama "Change" platform brought to its realization. ...

http://www.examiner.com/x-20026-Pittsburgh-Nonpartisan-Examiner~y2009m12d1-Molochs-sandbox
-----
The "Friendly" Electrocution of a Military Contractor

From "From Yes, KBR, Congress is Talking About You"
By David Isenberg
Author, Shadow Force: Private Security Contractors in Iraq

" ... For those who have forgotten, it was KBR which has done the majority of the electrical work at U.S. facilities in Iraq. That work resulted in faulty wiring in far too many facilities, resulting in the low-level electrocutions of 16 U.S soldiers and 2 contractors and hundreds more incurred shock-related injuries in Iraq over a span of four years.. The most recent was 25-year-old Adam Hermanson, a US Air Force veteran-turned private security contractor who died in a shower at the compound of his employer, Triple Canopy, in Baghdad's Green Zone on September 1, 2009. That a contractor's apparently shoddy work ended up killing a contractor can only be viewed as ironic. ... "

"Iggy has over two decades of experience in Special Forces units, including service with the U.S. Army's 1st Special Forces Operational Detachment-Delta (Delta Force). As Command Sergeant Major for Delta Force, Iggy was responsible to the National Command Authority for leadership, training, mentorship and implementation of policies and procedures for the U.S. military's most elite unit. He served as the subject matter expert on operational matters and command representative on military policy boards. He was responsible for hiring and firing every enlisted member in the unit. He conducted briefings for the U.S. President, Secretary of Defense and other four-star flag officers. ... "

A U.S. Army veteran with over 20 years of service, Kelvin spent his entire career within the Special Operations Community assigned to the US Army Rangers, US Army Special Forces and 11 years assigned to the 1st Special Forces Operational Detachment-Delta (Delta Force), where he acquired an exceptional level of expertise across the entire spectrum of special operation missions. Kelvin was awarded a Legion of Merit for his service.

Following his retirement, Kelvin served as the regional security manager in the Balkans for KBR and was a security advisor for Freeport McMoRan Copper and Gold in Indonesia

Triple Canopy is currently the defendent in a lawsuit filed by three former employees who worked for Triple Canopy under a contract for KBR. Former Army Ranger Shane Schmidt and former Marine Charles L. Sheppard III claim in the lawsuit that on July 8, 2004, while en route to the Baghdad airport, their shift leader declared he was "going to kill someone today" and shortly afterwards stepped out of the vehicle and fired rounds of his M4 rifle through the windshield of a stopped truck.

The suit goes on to claim the shift leader said, "This didn't happen, understand?" Soon after, the shift leader stated he had "never shot anyone with my handgun before" and then fired his handgun through the windshield of a parked taxi, killing the driver.

Recently, Triple Canopy has stopped recruiting from the Philippines and started in war-experienced rich El Salvador. Company spokesman, Joe Mayo, says, "They've got the right background for the type of work we are doing." After training in Jordan, the troops will head to Iraq for site security. --(inactive link)

Triply Canopy has also been linked to training exercises in Honduras at facilities set up in the 1980s by the CIA. The Honduran government expelled 105 Chilean soldiers who had been recruited by a Triple Canopy subsidiary, Your Solutions. The Honduran newspaper, La Tribuna, reported that Your Solutions has shipped over a couple hundred soldiers from Honduras to Iraq. [6]

On June 15th, 2007, Triple Canopy announced their acquisition of Clayton Consultants, Inc., a crisis management security consultancy offering incident response services and security consulting for threats like kidnappings, ransoms and extortion against their clients. The addition of Clayton under the Triple Canopy umbrella will expand their range of available services.