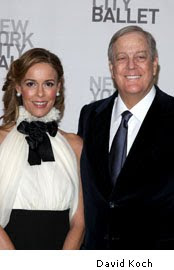 Right-wing billionaire David Koch, who along with his brother Charles owns the oil and gas empire Koch Industries, constantly presents himself as a champion of science. Next year, a wing of the Smithsonian will be named after him because of his generous donations. Indeed, in accepting Koch’s donations, the Smithsonian Human Origins Program director Rick Potts attempted to whitewash Koch’s philanthropist history:

POTTS: What we find in David Koch is a person who’s committed to doing things for the American public that has no relationship to politics

Koch apparently relishes this perception that his money buys. In an interview earlier this year, Koch pretended that he opposes organizations which politicize and distort science:

Q: What role do you think politics should play in educating the public about evolution?

KOCH: That’s an interesting question. I think politicians should really stay out of it and allow scientists to present the facts and discoveries. I hate to see it politicized.

In an op-ed in the Boston Globe yesterday, I observed that Koch has manufactured a positive image for himself by giving to laudable causes, while at the same time, quietly “funneling tens of millions of dollars to more subterranean efforts that reflect his conservative politics.” Despite his funding of the Smithsonian, Koch has done more to politicize and and undermine the public’s understanding of science than any other single person. Koch has funded the leading groups dedicated to spreading skepticism of climate change:

– Koch’s Americans for Prosperity, the right-wing tea party group which Koch founded in 1984 and continues to finance, has just announced that it will send a team of political operatives to Copenhagen for the United Nations Climate Change Conference. AFP intends to hold a press conference to attack any climate change solution the President promises as a mistake that will “kill jobs here” and “infringe on our personal and national freedoms.”

– Koch has funded the Competitive Enterprise Institute, which has been the most aggressive conservative front group heralding hacked e-mails as proof that climate change does not exist.

– Koch funds the “Hot Air Tour,” a campaign led by lobbyists stopping in cities across the country to call into question the science underpinning climate change. The tour also features an actual hot air balloon to illustrate their beleif that climate change science is just “hot air.”

The National Academy of Sciences, the US Global Change Research Program, and the Intergovernmental Panel on Climate Change have all come to the same conclusion: “that carbon dioxide emissions from fossil fuel use and the loss of carbon-sink capacity in heavily timbered forests are increasing temperatures and making oceans more acidic.” David Koch’s Koch Industries derives much of its profit from its oil refineries, one of the major emitters of carbon dioxide, and from its George-Pacific timber subsidiary, one of the largest contributors to the loss of carbon-sink capacity. So while it’s clear Koch’s bottom line is in conflict with addressing the world’s climate crisis, it should also be clear that he is no champion of science — no matter how many halls he buys at the Smithsonian.
Posted by Alex Constantine at Monday, December 07, 2009