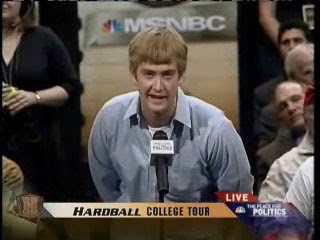 A saboteur! Peter Doocy, who is apparently the son of FOXNews' Steve Doocy of FOX & Friends, was one of a handful of students invited to ask a question of John McCain on MSNBC's Hardball, which broadcasted from Villanova University in Pennsylvania. Why a producer didn't say, "Hmmm...Doocy? Any relationship to the Steve Doocy on a rival network?", I just can't say. But the Mini-Doocy doesn't fall far from the tree, and Peter asked a question that would no doubt get him a gig working with Dad (or Drudge. C'mon Pete, aim high!) when he graduates.

"Hi, Senator McCain. My name is Peter Doocy, I’m a junior here. And I’m sure that you saw your…one of your Democratic opponents, Hillary Clinton, recently drinking whiskey shots with some potential voters. Now I was wondering if you think she’s finally resorted to hittin’ the sauce, just because of some unfavorable polling? And I was also wondering if you’d care to join me for a shot after this?"

... What's even sadder than this abomination of airtime is McCain's strange and rambling response. Please, someone explain to me why someone more than 50 years past his high school days is still harkening back to his high school athletic career?