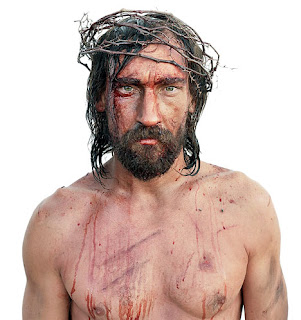 Most conservatives have two favorite pastimes: Jesus Christ and Swiftboating. To please them, I've prepared a political advert that combines both in a speculative Senatorial run against Joe Lieberman ...

Paid Political Message (FOX NEWS): It has been learned that the child Jesus was conceived outside marriage, an apparent infidelity, one that has been rumored for some time. Seems the mother of Jesus had something in common with Tiger Woods (wink; show retouched photo of Woods with hooker).

As an infant, baby Jesus reportedly slept in a barn with pigs and goats.

The sepia Nazarene, a non-English speaker, accomplished little of note as a young proto-Marxist apart from community organizing and some crude carpentry. There is no evidence that he finished high school. 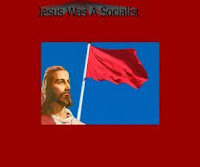 He never showered and was a Socialist (Newt Gingrich clip: "eye of a needle, indeed"), like Hitler (retouched photo of Hitler).

Jesus disappeared for a long period without explanation - some say to evade the law, the Bill Ayers of his time - reportedly wandering around in bohemian sandals, listening to "devil voices," as do Mark David Chapman and Son of Sam (show retouched photos), in the desert, entertaining a variety of temptations. What was he on? Perhaps taking after his adulterous mother, Jesus frequented at least one prostitute, and even stepped forward to defend her - centuries before the founding of ACORN - when she was tried in an informal court of her peers. It's said that his legal argument relied on "guilt-tripping" fellow Jewish people, an opportunist who exploited a genetic Achille's Heel.

He was also a far-left political elitist who often smarted off to authorities, and this landed him in a world of trouble. He even engaged in a violent act of terrorism when he physically assaulted licensed money changers operating legally at the Temple.

JOSEPH LIEBERMAN is a healer, too (of dwindling corporate balance sheets) - and he's never been cultified like his holier-than-thou opponent. Christ may walk on water, but can he STOP runaway Medicare tampering? Say NO! to Socialism. JOSEPH LIEBERNAM doesn't malinger in caves, like Jesus or bin Laden. JOSEPH LIEBERMAN doesn't necromance potable drinking water into the blood of Satan's vine. (show retouched photo of Satan) Vote for JOE LIEBERMAN, Independent Republican! God Bless. 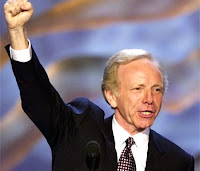 "Joe Lieberman raises a tiny fist after vanquishing Jesus Christ (D-Jerusalem), who had Vatican support but was crucified by Southern evangelicals in the polls, in a landslide victory ... "
Posted by Alex Constantine at Friday, December 18, 2009