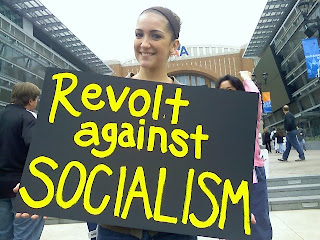 "The Tea Party ... is a well-orchestrated machine backed by powerful people willing to spend lots of money to attain their political goals through propaganda and deception. ... "

Following the unwritten rules of the Tea Party conservative movement, Richard Mackie (letter to the editor, Nov. 11) launched a rather blatant attack on my character rather than address the content of my letter of Nov. 8. To clarify: I was at the meeting. I also, as a veteran, wore my military cap. I served my country with pride.

The rise of the Third Reich utilized the same tactics as does the Tea Party. They capitalized on a critical time in German government (the disaster of World War I).

They did not address issues. Theirs was an attack on everyone in government. Those who dared question their motives were personally attacked. This "party" was not a poorly organized grassroots movement. It had strong backing and was well-orchestrated. After the Nazis' adroit use of propaganda, psychologically orchestrated demonstrations and great oratory, citizens joined ranks and the Nazis swept to power.

The Tea Party is not a spontaneous grassroots movement. It is a well-orchestrated machine backed by powerful people willing to spend lots of money to attain their political goals through propaganda and deception. These manipulators have no interest in the well-being of average Americans. They want people in Congress who will bend to their will.

In his last paragraph, Mr. Mackie and I agree. The people need to unite and rid our government of many career politicians who live in the back pockets of special interest groups rather than representing average citizens who elected them. This is not restricted to one party. We need a time of accounting.