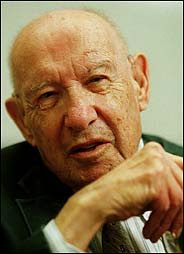 Privatization is very popular among laissez-faire types today. The recent issue of the Journal of Economic Perspectives offers a different tale in which the term privatization is falsely credited to Peter Drucker. In fact, Nazis coined the term. Their intent was to skew the distribution of income toward the rich, with the objective of reducing consumption. After all, the rich have a lower marginal propensity to consume.

187-8: “The standard story on the coining of “privatization” reports that in 1969 Peter Drucker used the term “reprivatization” in the sense that economists understand it today. In The Age of Discontinuity (1969, p. 229), Drucker makes a negative appraisal on the managerial capabilities of the public sector: “Government is a poor manager …. It has no choice but to be `bureaucratic.’” Drucker’s (p. 233) analysis of how government works leads him to what he takes as “the main lesson of the last fifty years: the government is not a doer.” Thus, Drucker (p. 234) proposed adopting a “systematic policy of using the other, the nongovernmental institutions of the society of organizations, for the actual `doing,’ i.e., for performance, operations, execution. Such a policy might be called `reprivatization.’” Drucker referred to “reprivatization” because he proposed giving back to the private sector executive responsibilities that had been private before the public sector took them over through nationalization and municipalization starting in the last decades of the nineteenth century.”

189-90: “In the late 1930s and the early 1940s, a number of works were devoted to the analysis of economic policy in Germany under the rule of the National Socialist Party. One major work was Maxine Yaple Sweezy’s (1941) The Structure of the Nazi Economy. Sweezy stated that industrialists supported Hitler’s accession to power and his economic policies: “In return for business assistance, the Nazis hastened to give evidence of their good will by restoring to private capitalism a number of monopolies held or controlled by the state” (p. 27). This policy implied a large-scale program by which “the government transferred ownership to private hands” (p. 28). One of the main objectives for this policy was to stimulate the propensity to save, since a war economy required low levels of private consumption. High levels of savings were thought to depend on inequality of income, which would be increased by inequality of wealth. This, according to Sweezy (p. 28), “was thus secured by `reprivatization’ …. The practical significance of the transference of government enterprises into private hands was thus that the capitalist class continued to serve as a vessel for the accumulation of income. Profit-making and the return of property to private hands, moreover, have assisted the consolidation of Nazi party power.” Sweezy (p. 30) again uses the concept when giving concrete examples of transference of government ownership to private hands: “The United Steel Trust is an outstanding example of `reprivatization.’” This may be the first use of the term “reprivatization” in the academic literature in English, at least within the domain of the social sciences.”