The Hidden Engine of the Eugenics Movement 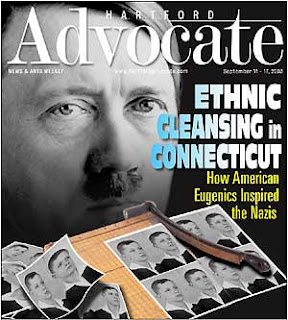 The eugenics movement began during a bull market in the late 1800s. At first, it gained respect among many in the upper and educated classes with the premise that the human race can improve itself by controlling who can procreate. But like a societal version of Dr. Jekyll and Mr. Hyde, a later succession of bear markets morphed eugenics into a rationale for genocide.

Few people today know what the eugenics movement was; fewer still understand how deeply it permeated society. By the early 1900s it was deeply embedded in the minds of social, educational and governmental elites. By 1920 it was woven into public policy. Its advocates included intellectuals and politicians whose names – and quotes—may astound you.

Even today most people fail to ask the obvious question: How could so many people have been so deluded about an ideology of social control?

The lead article in the November issue of The Socionomist is a study of the eugenics movement. It surveys 225 years of the movement's origins and influence, complete with detailed charts which compare its history with stock market trends. The study explores how social-mood declines steered the eugenics movement into mass murder, and also explains why this epic delusion matters to your future. Some think that eugenics is confined to the trash heap of bad ideas, but in truth its ideology of top-down reproductive control is likely to regain popularity as the bear market grinds on.

In fact, The Socionomist identifies signs of a modern resurgence of eugenic ideas and devotes a section to a hidden engine of the eugenics movement -- the irrational, bear-market fear of uncontrolled population growth:

Fear of uncontrolled population growth is a central tenet of eugenic thought. If one were to assume, as most people would, that outside causes influence social mood, one would expect growth in the population to encourage growth in eugenics.

A single, simple chart deals with this assumption, and shows how waves of social mood regulate population growth and the fear of it.

Socionomics throws open a window into our long-term future with forecasts that may seem far-fetched. Even so, this study predicts that fears about the environment and overpopulation could be the rationale for a new eugenics movement.

After two months of research and analysis, we published the eugenics study on November 13. Just five days later – November 18 – the United Nations Population Fund issued its 2009 State of the World Population report. Consider these quotes from an AFP article about that report:

Braking the rise in Earth's population would be a major help in the fight against global warming, according to an unprecedented UN report published Wednesday that draws a link between demographic pressure and climate change….

"It really is the first time that a United Nations agency has looked hard at the connections between population and climate change… People are at the root of the problem.…”

The report… paints a grim tableau of the peril of climate change and the likely impact on humans, [and] notably puts distance between a decades-long tradition in the UN arena whereby population growth and its part in environmental destruction were rarely – if ever – evoked.

"Fear of appearing supportive of population control has until recently held back any mention of 'population' in the climate debate," the document admits.

Things, though, are starting to change. More than three dozen developing countries have already included population issues in national plans on climate, it says.

For now, the UN report emphasizes that voluntary measures should drive population policies. The eugenics movement began similarly. Then and now, lots of people believe it to be a good idea. It remains history’s clearest lesson in how large-degree mood declines can cause entire societies to misuse a legitimate science like genetics – or perhaps climatology – to justify class- or race-based policies.