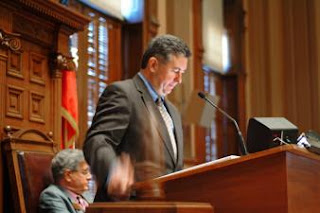 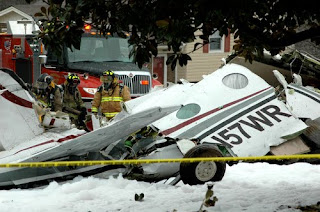 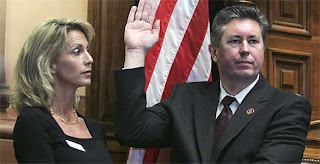 Glenn Richardson in January 2007, when he was sworn in during the first day of the Georgia General Assembly. His wife Susan holds a Bible. (Associated Press)

Reporting from Atlanta - Embroiled in a strange and unsavory drama involving a suicide attempt and allegations of an affair with a lobbyist, Georgia's powerful House Speaker Glenn Richardson, a Republican, said Thursday that he would resign.

The announcement by Richardson -- a hard-charging, family-values conservative -- came amid Republicans' mounting calls for his ouster and fears that a lingering sex and ethics scandal could harm the Georgia GOP in next year's state elections. Richardson will leave office Jan. 1.

The GOP controls both houses of the Legislature, and Republican Gov. Sonny Perdue is completing his second and final term. But next year, every legislator is up for reelection in a shaky economy. And on the Democratic side, Roy Barnes -- who served as governor from 1999 to 2003 and could appeal to moderates -- has declared his intention to run again.

Republicans "could have their whole legislative agenda, not to mention their leadership, done in by a sex scandal," said Tom Crawford, editor of the Georgia Report, an online political news service. "That's not good for any party, but especially bad for a party that here in Georgia has positioned itself as a champion of mainstream family values."

But Jerry Luquire, president of Georgia Christian Coalition, said it was too early to "predict doom" for the party based on one scandal. "I don't see a shower and call it a thunderstorm," said Luquire, who had called on Richardson to step down.

The House speakership is the second most powerful public office in Georgia. After Richardson distinguished himself as minority leader - during which time he pushed for a constitutional ban on same-sex marriage - he helped engineer the 2004 Republican takeover of the House, becoming the first GOP House speaker in Georgia in 134 years. ...

He has also been dogged by talk of scandal since January 2007, when Bobby Kahn, then chairman of the Georgia Democratic Party, filed a complaint with a legislative ethics committee. It accused Richardson of having an affair with a lobbyist with Atlanta Gas Light while he was a co-sponsor of a bill that would have financed a $300-million pipeline for the company.

A committee of two Republicans and one Democrat dismissed the complaint 12 days after it was filed.

Richardson's private life has seen turmoil since. He and his wife, Susan, were divorced in 2008, and the recession has reportedly harmed his law firm and a bank in which he had invested.

On Nov. 8, Richardson shocked Georgians when he attempted, by his own admission, to kill himself by overdosing on pills. His candor about the episode -- and his admitted struggle with depression -- earned him kudos from anti-suicide activists.

But this week, his ex-wife gave an interview to a local TV station, renewing allegations of the affair and producing e-mails that she said proved it. She also alleged that Richardson recently threatened to beat her and have state law enforcement track her down when she went out of town with a new boyfriend.

The suicide attempt, she said, was an effort to win her back -- "to guilt me into doing what he wanted," she said.

Before the House speaker's announcement Thursday, House Minority Leader DuBose Porter, a candidate for governor, said House Democrats were again looking into the possibility that Richardson breached ethics rules. Now, he added, they would look to see whether any crimes were committed.

"What has now been confirmed is what we have suspected for a long time," Porter said. "Everybody around the Capitol knew this was happening. It finally got confirmed by his wife." ...