Blackwater uses Iraqi civilians for target practice and engages in illicit CIA assassinations, and last I checked the company was still receiving gererous federal funding. Disgraced CEO Erik Prince, even in notoriety, is still described by too many reporters as a "patriot." Where are the screams of outrage from Fox News? But a few Acorn staffers give advice to a prostitute, and the little Hitlers of the GOP echo chamber scream bloody murder. Support Acorn. The campaign to destroy the organization is a manipulative, far-right vote-suppression scam, and the outrage is faux. - AC 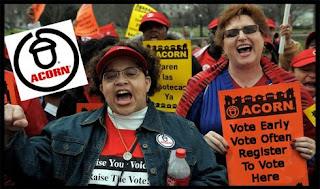 A federal judge has ruled that the U.S. government’s decision to cut off funding to the Association of Community Organizations for Reform Now (ACORN) was unconstitutional.

U.S. District Judge Nina Gershon issued a preliminary injunction against the government, saying that it is in the public’s best interest to continue to fund the controversial and embattled anti-poverty group, according to the Associated Press (AP).

In its lawsuit, ACORN claimed that Congress’ decision to cut off its funding was unconstitutional because it targeted an individual organization without due process.

Gershon agreed, stating in her ruling that ACORN raised a "fundamental issue of separation of powers."

"They have been singled out by Congress for punishment that directly and immediately affects their ability to continue to obtain federal funding, in the absence of any judicial, or even administrative, process adjudicating guilt," said Gershon.

Meanwhile, two congressmen have called on the Justice Department to appeal the decision, calling it "nothing short of preposterous," according to Fox News.

"The district court’s decision is troubling in many respects, but most significantly, if allowed to stand, it would effectively excise from the Constitution Congress’ express Spending Clause power to refuse to appropriate federal funds to an organization that has shown itself likely to misuse those funds in the future," the letter states.