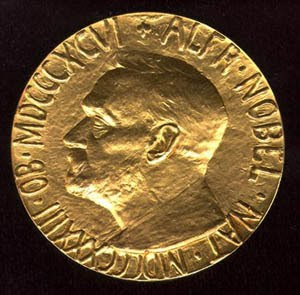 "In 1973, Dr Henry Kissinger was chosen for the honour for plotting 9/11 in Chile. If Osama bin Laden has not been considered worthy enough to pay Oslo a visit on Dec 10, it is because his 9/11 did not prove as deadly. ... "

It was the Stalinist absurdities in totalitarian Soviet Russia that drove George Orwell to shout in disgust: ''War is peace. Freedom is slavery. Ignorance is strength.'' The entire west, it seems, has become Orwellian Oceania where the corporate media keep their audiences ignorant, the trade unions ensure obedience, if not slavery, while every ten years the Oslo-based Nobel Committee honours some butcher of humanity to signify the Orwellian character of the age we are living in.

Hence, one finds it irritating to see conscientious editors agitating at the bellicosity in Obama's speech to accept his Nobel for Peace on Dec 10. These scrupulous editorialists certainly have long careers but definitely very short memories. Only seven years ago, Jimmy Carter had been invited to Oslo for the ceremony held every Dec 10. On the eve of his Norwegian trip, Obama dispatched 30,000 troops to the Hindukush, to eliminate the bearded monster. That very Frankenstein was fathered by Jimmy Carter. Also, it was Carter's administration that, among others, armed Pol Pot, the Indonesian junta, the Nicaraguan Contras, besides pampering Christian fanatics in his own country and a confessional zealot at the helm of Pakistan.

Shimon Peres and Yitzhak Rabin were, in 1994, invited to Oslo with their hands stained with Arab blood. The 1994 event definitely was an attempt to dispel the impression that the Norwegian elite held South African Apartheid in great esteem, since only the previous year F W de Klerk had won laurels at Oslo. 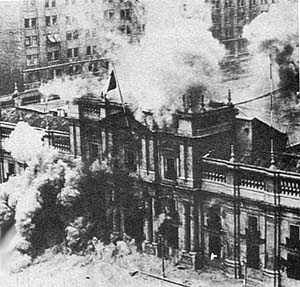 La Moneda, Chile's presidential palace, under fire during the 1973 coup that toppled the Marxist government of Salvador Allende. The military junta that succeeded Allende, headed by Augusto Pinochet, established a record for human rights abuses that continues to haunt Chilean society.

In 1973, Dr Henry Kissinger was chosen for the honour for plotting 9/11 in Chile. If Osama ben Laden has not been considered worthy enough to pay Oslo a visit on Dec 10, it is because his 9/11 did not prove as deadly. Not merely did Henry Kissinger plot the murder of 5,000 Chileans and plunge the country into brutal dictatorship for two decades, Chile's elected president Salvador Allende was also gunned down. Henry Kissinger's complicity in tilting US policy in favour of Yahya Khan's troops busy massacring Bengali nationalists is as well documented as his role in perpetuating the Vietnam War. For fear of arrest on charges of war crimes, he hardly travels outside of the US.

It is not that the Noble Peace Prize turned into a joke only gradually, as prestigious institutions often tend to degenerate when ideological or bureaucratic corruption creeps in. The Oslo-based committee men have been attracted to bloodthirsty politicians. As early as 1906, US war president Theodore Roosevelt was granted the Nobel Prize for Peace in recognition of his gory role in Spanish-American wars. In 1920, Teddy Roosevelt and Woodrow Wilson shared the prize for their authorship of the notorious Treaty of Versailles.

The rise of Hitler was greatly helped by this unfair treaty. But until the Second World War, Soviet communism was a bigger threat. Hitler, in fact, was a vital ally for Stalin's containment. It therefore was pretty natural for Swedish MP E G C Brandt to nominate Hitler for the Nobel Peace Prize for 1939. Hitler was in a hurry and initiated WWII. Brandt had to withdraw his suggestion.

Ironically, a similar suggestion was presented in 2002 by a Norwegian MP, who suggested to the Nobel Committee two of Hitler's clones, Tony Blair and George Bush, for consideration of the peace prize. A massive signature campaign against this suggestion made the committee change its mind. Obama, in fact, is not merely a consolation for 2002. The Nobel Committee granted him the prize hoping that he will soon turn his attention to Iran.