Anyone still of the opinion that this site peddles "conspiracy theories" should look around at articles that veterans are writing these days - then get serious, support the troops, start finding your way back to reality, and give some thought to putting the brakes on the political criminals who hold power over our lives. - AC 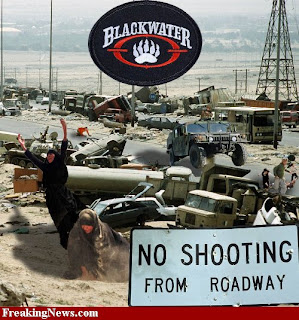 This month Erik Prince has resigned from the scandal ridden Xe inc. formerly know as Blackwater, revealing a decade long relationship as a deep cover CIA operative specifically tasked with building and mobilizing an elite army of private assassins for the CIA.

For the past six years, Prince "appears to have led an astonishing double life," writes Adam Ciralsky. "Publicly, he has served as Blackwater's CEO and chairman. Privately, and secretly, he has been doing the CIA's bidding, helping to craft, fund, and execute operations ranging from inserting personnel into 'denied areas' places US intelligence has trouble penetrating to assembling hit teams targeting Al-Qaeda members and their allies."

Blackwater is, and has been from the onset, a private army or extension of the CIA. An army that has been implicated in killing civilians, bombing mosques [VIDEO], torture, smuggling weapons, dressing up as aid workers, CIARaids, and even running child prostitution rings [VIDEO] only to be unsuccessful at paying off Iraqi officials in an attempt to cover up their crimes. ...

Other Articles of Interest from Veterans Today

WHEN WILL WE HAVE HAD ENOUGH? - THE KENNEDY MURDER AND THE 9/11 COVER UP ARE ONLY A SMALL PART

NO LONGER OUR AMERICA: THE LAND OF RATS - EMPLOYEES, INMATES, EVEN VICTIMS BUT NO LONGER CITIZENS