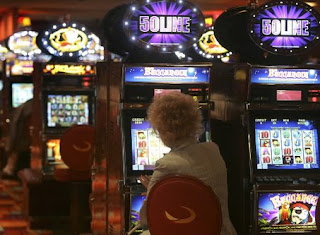 Major Republican donors with ties to horse racing are crossing party lines to support a Democrat running for the state Senate who promises he'll back casino-style gambling at racetracks.

If that trend continues beyond the Dec. 8 special election, it could have long-term implications for control of the state Senate, which Republicans now hold by a 19-17-1 margin.

"That is a real danger for the Republicans ... to the extent that this is at the forefront in 2010," said Joe Gersh tenson, political science professor at Eastern Kentucky University. "It presents a very interesting dynamic. To some extent, it's better for Democrats for it not to be resolved before 2010."

Jimmy Higdon was chosen by Republicans to run for Dan Kelly's seat.

Racehorse owner Virginia "Gigi" Lazenby of Nashville is among the donors who have crossed party lines in the race. She traditionally has supported Republicans, including Kentucky Sen. Mitch McConnell, and was a "bundler" who raised more than $100,000 for Sen. John McCain's presidential campaign last year.

But Lazenby has given $1,000 to Democrat Jodie Haydon's state Senate campaign in Central Kentucky's 14th District.

"I strongly believe Kentucky needs to have alternative gaming in order to support racing," Lazenby said. "I'm very concerned that my Republican friends in Kentucky don't understand this. ..."

Lazenby also has an interest in Kentucky Downs in Franklin, near the Tennessee line. She said she has owned less than 1 percent of the track for three or four years, an investment eclipsed by the money she has in racehorses.

Williams, the Republican Senate president from Burkesville, said donors like Lazenby and the family of horseman Will Farish, who have given $3,000 to Haydon's campaign, are "trying to buy a legislator who will give them a special monopoly."

The Farishes, who own Lane's End Farm in Versailles, have been staunch Republican donors but are vocal in their determination to unseat Williams as Senate president because they say he blocked legislation that would have allowed racetracks to add video slot machines.

Williams on Tuesday countered that big money from racing interests and from highway contractors is bankrolling Haydon upfront and behind the scenes through a separate issues committee known as Keep Our Jobs in Kentucky.

The issues group won't have to report until next year how much money it has raised or from whom.

Of the $243,455 donated directly to Haydon by individuals and political action committees, about a fourth of the money — $58,575 — has ties to the horse industry, with $14,000 donated by Churchill Downs directors and executives and $9,000 donated by owners of other Kentucky racetracks.

"If they take control of the Senate by putting in thousands, and even millions, of dollars in return for a monopoly, what will happen the next time someone tells them no?" Williams said. ...

OUTCOME OF THE ELECTION
By Janet Patton and Beth Musgrave
lexington Herald-Leader | Dec. 10, 2009

... Kentucky's horse industry, which bet heavily on a Democratic win in Tuesday's special state Senate election, wasn't prepared for defeat and doesn't have a short-term plan to advance legislation that would allow slots at racetracks, industry leaders say.

"We didn't plan on losing, so we don't have a strategy other than we want to attempt to continue to have our voices heard," said Ric Waldman, a bloodstock consultant who is one of the directors of the issues group Keep Our Jobs in Kentucky Inc.

The horse industry group spent hundreds of thousand of dollars on advertising that opposed Republican Jimmy Higdon and supported Democrat Jodie Haydon. Haydon's election had been seen as critical to the horse industry's efforts to get casino-style gambling, but he lost by a wide margin. ...