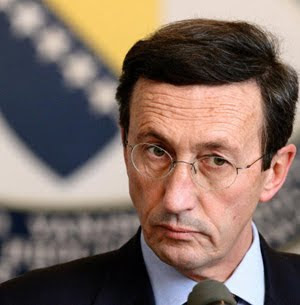 ROME — He has emerged from the fringes of a neo-Fascist party to position himself as the heir apparent to Premier Silvio Berlusconi.

Gianfranco Fini, a chain-smoking politician who once called Benito Mussolini the 20th century's greatest statesman, has undergone a remarkable transformation to the center of Italian politics, adopting liberal positions that have prompted jokes that he's the best leader the leftist opposition never had.

Recently, Fini has championed a series of causes that are traditionally associated with the Left: He's in favor of citizenship rights for immigrants, opposes the church on issues such as assisted fertility and the right-to-die, and recently used an obscenity for racists that made front-page news.

One right-wing paper summed it all up with an ironic epithet: Comrade Fini.

There's another reason why political commentators are comparing Fini to an opposition leader: While his political skills and popularity make him a crucial ally for Berlusconi, Fini's independent streak has also turned him arguably into the scandal-tainted leader's worst enemy.

Fini has clashed with Berlusconi on issues ranging from the judiciary to institutional reforms, and briefly withheld his support for a bill shielding the premier from two ongoing corruption trials.

He has lent Berlusconi only lukewarm support in the wake of a sex scandal in which — among other peccadilloes — the leader was allegedly caught on tape cavorting with a high-class prostitute.

It has all raised speculation about the stability of the 18-month-old government and a possible succession battle. Fini, 57, himself has claimed the right to dissent from Berlusconi saying that "otherwise you are not loyal, you are submissive."

"Berlusconi is certainly the leader, and we in the center-right recognize this leadership," Fini said in a recent interview on state TV. "But it is not an absolute monarchy."

Fini has been making the rounds to promote his new book, called "The Future of Freedom" and aimed at those who were born after the fall of the Berlin Wall in 1989. It is the manifesto of a politician who has been working hard to establish himself as an independent-minded, post-ideological leader committed to democracy and free markets.

The shift from neo-Fascism to mainstream conservatism has been extraordinary even for a country where politicians are almost as quick to change sides as they are to gulp down their morning espressos. Fini has long retracted his statement on Mussolini, and initial doubts that his transformation was a mere act of political opportunism have now largely faded.

Perhaps nothing exemplifies Fini's political journey as the profoundly different receptions he got during two landmarks trips.

In 1999, during a trip to Poland, Fini was pelted with eggs and snowballs by local anarchists protesting his visit to the Auschwitz Nazi death camp. In 2003, he received a warm welcome by Israeli leaders during a long-sought trip to the Jewish state.

That visit enhanced Fini's international credibility, and a year later he became the foreign minister in a government that has been one of Israel's closest friends in Europe.

In his book, Fini calls the Holocaust "the greatest crime against humanity ever committed" and "an unspeakable horror." Still, while he writes extensively about Nazism and Soviet horrors under Stalin, he devotes no more than a passing mention to Italian Fascism, limiting himself to saying the regime led Italy into the ruinous World War II.

Today, Fini serves as the speaker of the lower house of Parliament, making him one of Italy's top ranking officials. He has made no secret of his political ambitions, saying in an interview with The Associated Press in 2006 that he was ready to serve as premier.

Berlusconi is 73 and is unlikely to run again when his current term ends in 2013.

Fini declined to be interviewed for this profile.

Even Fini's adversaries admire the Bologna native as a skilled politician: he is praised for his political instinct, polished speech delivery (often without notes) and straight talk that stands in contrast to the convoluted language of many Italian politicians.

Carving out space for himself next to such a larger-than-life figure as Berlusconi hasn't been easy.

Fini has done so by defying expectations and taking bold steps over the course of a career that began in the late 1970s and took off in the early 1990s, when a failed but close bid to become mayor of Rome put him on the political map.

By 1995 Fini had brought his party, founded on the ashes of Mussolini's Black Shirts, toward the mainstream conservative fold, renaming it National Alliance from Italian Social Movement.

Last year, Fini and Berlusconi decided to merge their two parties into The People of Freedom, which was Italy's biggest vote-getter in 2008 elections that returned Berlusconi to power for a third stint.

But his stances have earned him enemies as well as admirers, possibly complicating the succession.

The Catholic Church has been annoyed by Fini's positions on bioethical issues. Some of his own allies fear that he may be alienating hard-core rightist supporters. And Berlusconi loyalists resent a figure who has challenged the premier so openly.

"He's an expert politician, but that will not necessarily translate into electoral support," said Professor James Walston of the American University of Rome.
Posted by Alex Constantine at Thursday, December 10, 2009