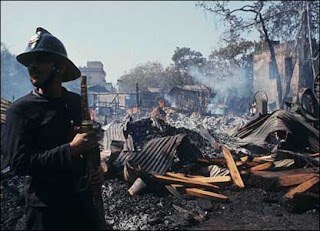 Washington, Dec 17 (IANS) The Central Intelligence Agency (CIA) has denied that Pakistan-born US national David Coleman Headley, a key suspect in the 26/11 terror attacks, was its agent at any point of time.

“I can’t comment on an ongoing investigation, but any suggestion that this individual worked for the CIA is flat wrong,” said CIA spokesperson Marie E. Harf.

Headley has been charged in a federal court with conspiring to commit terror attacks outside the US and providing material support to terrorist organisations.

Media reports in India and the US quoting unnamed officials have said that Headley could have been a “double agent”, working for the CIA as well as Pakistani terror groups including Lashkar-e-Taiba (LeT), which carried out the Mumbai attack that killed nearly 170 Indians and foreigners.

Headley, now in a Chicago jail, was arrested by the Federal Bureau of Investigation Oct 3 while planning to go to Pakistan via Philadelphia.

Meanwhile, US strategic think tank Stratfor says it is difficult to establish if Headley was indeed a double agent.

“At present, it is very difficult to ascertain if Headley was a double agent who was really reporting to LeT and the Harkat-ul-Jehad-al-Islami (HUJI) the entire time he was ostensibly working for the US government or if he was merely a rogue informant who was playing both ends against the middle for his own personal benefit,” it said.

“Such rogue sources have been seen in jihadist cases before. If Headley was either a double agent or a rogue source, there may be some significant blowback for the US government as further revelations are made about the case.”

US authorities say that in order to conduct surveillance for the Mumbai attacks, Headley made five extended trips to the city between September 2006 and July 2008.

During each trip, Headley reportedly took pictures and made videos of various targets, including those attacked in November 2008.

He also reportedly travelled to Pakistan after each trip to brief his co-conspirators there and to provide them with his maps, sketches, photos and videos.

http://www.thaindian.com/newsportal/south-asia/cia-denies-headley-was-its-agent_100290630.html#ixzz0ZyXfZaxk
--------------------
“ ... That Headley was an agent for the DEA is known. Whether he was being used by the CIA as well is a matter of speculation, but it is almost certain that the CIA was aware of him and his movements across the subcontinent. ... ”

David Headley was allegedly involved in reconnoitring targets for the November 2008 Mumbai attacks, including the Taj Hotel
Rhys Blakely in Mumbai
www.timesonline.co | Dec. 17, 2009

A key terror suspect who allegedly helped to plan last year’s attacks in Mumbai and plotted to strike Europe was an American secret agent who went rogue, Indian officials believe.

David Headley, 49, who was born in Washington to a Pakistan diplomat father and an American mother, was arrested in Chicago in October. He is accused of reconnoitring targets in India and Europe for Lashkar-e-Taiba (LeT), the Pakistan-based terror group behind the Mumbai attacks and of having links to al-Qaeda. He has denied the charges.

He came to the attention of the US security services in 1997 when he was arrested in New York for heroin smuggling. He earned a reduced sentence by working for the US Drug Enforcement Agency (DEA) infiltrating Pakistan-linked narcotics gangs.

Indian investigators, who have been denied access to Mr Headley, suspect that he remained on the payroll of the US security services — possibly working for the Central Intelligence Agency (CIA) — but switched his allegiance to LeT.

“India is looking into whether Headley worked as a double agent,” an Indian Home Ministry official said yesterday.

Mr Headley, who changed his name from Daood Gilani, was in Mumbai until two weeks before the attacks on the city, which claimed 166 lives last November. It is alleged that he spent months checking targets in India’s commercial capital, using his Western looks and anglicised name to move in elite social circles, hobnob with Bollywood actors and even to pass himself off as Jewish.

Despite being firmly on the radar of the US intelligence agencies, he was allowed to return to India as recently as March. Indian officials are furious that their American counterparts did not share details of that visit at the time. The Indian media has raised the possibility that Mr Headley was being protected by his American handlers — a theory that experts say is credible.

“The feeling in India is that the US has not been transparent,” said B. Raman, a former counter-terrorism chief in the Indian foreign intelligence service, the Research and Analysis Wing.

“That Headley was an agent for the DEA is known. Whether he was being used by the CIA as well is a matter of speculation, but it is almost certain that the CIA was aware of him and his movements across the subcontinent.”

According to Mr Raman, it is probable that Mr Headley, who was arrested when the US authorities learned that he was about to fly to Pakistan, was listed on the main database of the US National Counterterrorism Centre, a facility used by the CIA and several other American agencies to track terror suspects.

Indian officials suspect that US agencies declined to share intelligence to avoid compromising other secret operations and to to be able to deny any link with Mr Headley.

Analysts believe that the US may also have been anxious to avoid sharing information that could further raise tensions between India and Pakistan, nuclear-armed neighbours who have fought three wars.

According to documents put before a court in Chicago, Mr Headley had links with the Pakistan Army and, through it, with al-Qaeda.

As well as helping to co-ordinate the Mumbai atrocity, Mr Headley is accused of planning attacks on Mumbai’s Bollywood film industry, the Shiv Sena, a Hindu extremist group also based in Mumbai, a major Hindu temple, and a Danish newspaper that had published cartoons depicting the Prophet Muhammad.

The US authorities allege that he was close to Tahawwur Hussain Rana, a former Pakistani schoolmate and businessman who is also being charged with planning to attack the Danish newspaper, Jyllands-Posten. Mr Rana is accused of having known about the attack on Mumbai in advance.

The CIA denied that Headley had worked for the organisation.

“Any suggestion that Headley was working for the CIA is complete and utter nonsense. It’s flat-out false,” Paul Gimigliano, from the CIA’s Office of Public Affairs, said.

The Indian Home Secretary, Gopal Krishna Pillai, has said that his Government would seek the extradition of Mr Headley — a request that has so far been stonewalled by US officials.