The Nobel Judge who Hobnobbed with Nazis 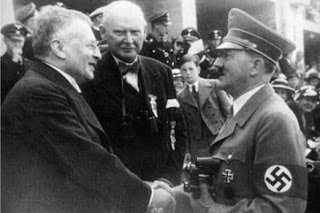 Sven Hedin was one of Sweden's most famous scientists. Back in the early 1900s he explored Central Asia and Mongolia, and became an international cartographer, hydrographer, photographer and author of popular travel books such as A Conquest of Tibet and Across the Gobi Desert.

Among the 150-odd books he wrote were multi-volume atlases of Central Asia.

In 1905 Hedin was appointed one of 18 judges on the Nobel Prize Committee. He continued voting on nominees until 1949.

In the 1930s, he came to admire Adolf Hitler and often visited him.

"Whenever I wanted to see Hitler I would call Prince Wissen of the German embassy here in Stockholm, a fine fellow, on Monday.

"He would call Berlin the same day, phone me back several hours later, and say Hitler would lunch with me on Friday. I would leave Thursday so as not to be late, and then see Hitler.

"He was a hypnotic talker, a fascinating man. I also made friends with Goebbels, Himmler, Goering and Doenitz."

Now one would think that Nobel prize judges would be the most upright, august, wise, fair-minded and incorruptible people on Earth but, in an interview in 1946, Hedin told American writer William Irving that committee members were as prejudiced, irrational and vain as the rest of us.

Hedin explained that the anti-Semitism of one judge kept the prize from Albert Einstein when Einstein was expected to win it. The judge said that the theory of relativity was not actually a discovery, had never been proved, and was valueless. So they withheld the prize from Einstein for seven years, by which time the dissenting judge's influence had waned, and Einstein won the prize in 1921.

Another judge so hated Russians that he prevented Tolstoy, Chekhov Andreyev and Gorky from winning prizes. H G Wells? "Too minor and journalistic." Somerset Maugham? "Too popular and undistinguished." James Joyce? Hedin was puzzled. "Who is he?"

Most committee members were prejudiced against American novelists because wives tried to nominate their husbands officially. French and Italian writers Gide and D'Annunzio were denied the prize because they behaved immorally.

Hitler bestowed many honours on Hedin in the 1930s and asked him to make a pro-Nazi address at the Olympic Games in 1936. For his 75th birthday, they bestowed the Order of the German Eagle on him.

During World War II, Hedin was one of few prominent Swedes who urged Sweden to abandon its neutrality and support Nazi Germany. Even when Germany lost the war, Hedin pressed for America to join forces with a resurrected Germany in a third world war against Russia.

After the war, Hedin became an aged embarrassment to the Nobel Committee but he never regretted his pro-Nazi stand. He claimed that his direct line to Hitler and Himmler enabled him to free many Jewish intellectuals and their families from the Nazi concentration camp at Sachsenhausen.

But his science lives on. The Chinese Government still uses his 80-year-old maps to construct railways and canals, and to pinpoint mineral deposits.