Covering Up CIA Mind Control at Ft. Hood - Government "Investigates" Itself with an "Independent" Review ... by Former DCI William Webster 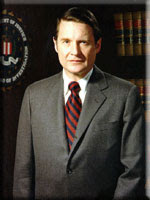 WASHINGTON (Reuters) - FBI Director Robert Mueller ordered an independent review on Tuesday of how the agency handled information that the military psychiatrist charged in the Fort Hood shooting had communicated with an anti-American cleric in Yemen.

Mueller asked William Webster, the former head of the FBI and CIA as well as a former judge, to conduct the review of the domestic law enforcement agency's actions and policies before the November 5 shooting that killed 13 people. ...

William Webster has played this game before - but was humiliated when his corrupt past caught up with him:

" ... Former FBI director William H. Webster ... had been chosen in 2002 to head the federal accounting oversight board created in the wake of the scandals at Enron Corp. and WorldCom Inc. But he withdrew his name from consideration after it became public that he had served as a director and head of the audit committee of U.S. Technologies Inc., a Washington manufacturer whose chief executive, C. Gregory Earls, was later convicted of defrauding investors.

"U.S. Technologies ceased to exist as a publicly traded company as part of a settlement with the Securities and Exchange Commission. The controversy also contributed to the resignation of Webster's sponsor for the accounting board job, Harvey L. Pitt, as chairman of the SEC. ... "

And then there was Iran-contra:

Webster is no stranger preventing the investigation of dubious activities by the CIA. In the late 80's, he helped cover up the Iran-Contra investigation.

Judge William Webster obstructed the Walsh investigation of Iran-Contra, particularly the case against a high-ranking operations officer who was responsible for illegal arms deliveries to the Contras. The officer was indicted by a Grand Jury for making false statements and obstructing the investigations of the CIA’s Inspector General as well as the work of the Tower Commission, but the case was dismissed after Webster refused to release necessary documents.

In place of justice, the former CIA director would ask for the nation’s trust.

A bill that would set up an independent Inspector General is pending in Congress, and Mr. Webster appeared to be moving quickly to head off the idea, which has long been opposed by the agency on security grounds. He said he intended to strengthen the agency's own inspector general's office by making a stint there mandatory for officials interested in senior management positions, and he promised to increase the size of the investigative staff and improve its training.

... It was Mr. Webster's hope that the release of the statement, coupled with the dismissal of two agency officials and the disciplining of others implicated in the Iran-contra affair, would end what he has termed "a testing chapter in the history of the C.I.A."

... Mr. Webster spoke often of the need to rebuild trust of his agency, both in Congress and among the American people. He said he well understood the problems posed by maintaining a secret intelligence agency within a democracy premised on the idea of open debate. "If you can't trust an agency like ours," said Mr. Webster, "you're in trouble, because we are going to do a lot of things that we can't tell you about."

Webster’s statement in 1988, when trying to stop the investigation into the Iran-Contra episode, could have been recycled and applied to the current DOJ case, which centers on the potential unlawful interrogation of detainees. The most infamous site of the alleged activity is at the Abu Ghraib prison in Iraq. The question which should be asked of Webster, then, is where he was in 2003 when these abuses occurred. ...