John Birch Society, a Fascist Front, Back in GOP Fold

In a display of political rehabilitation surpassing even Richard Nixon’s return to power, the John Birch society has been invited back into the big tent of the Grand old party. For those unfamiliar with the John Birch society, it was a post war conservative tea party movement on steroids.

Birchers were so rabidly conservative, even republican President Dwight David Eisenhower was considered a willing pawn of the vast communist conspiracy, the league of women voters were commie inspired shrews and fluoridation of water, a secret plot by the Stalinist’s to bring about socialized medicine and render American men impotent.

Civil rights according to Brother John was no less than a dastardly plan to establish a Negro soviet state in the good old US of A, which tied in logically with the fluoridation of water. The Birch society could demonstrate with pie charts and graphs way back when, that poisoning of water with fluoridation would first occur in white dominated urban areas, resulting in sex starved white women seeking comfort in the arms of colored men, who as any wise Caucasian of the age knew, were naturally over endowed, leaving white men who hadn’t been rendered limp by fluoridation feeling physically inferior.

Brother John warned that if the Negro obtained civil rights, vast swaths of the American heartland would within a couple generations, become havens of miscegenation and Negro domination. Most historians credit the late William F. Buckley with exposing the Birch society for what they were and putting an end to their political aspirations and influence, they never went away of course, but like the K.K.K the leaders of the movement suffered a complete collapse of credibility, political fortune and intellectual influence. Because the Birchers went out of fashion prior to the advent of modern video and sound bite technology, I speculate the current Grand Poobah assumed he could simply claim the liberal media was engaged in a slander and smear campaign when the facts were reported.

MSNBC’s Rachel Maddow reported some of the facts I have passed along in this post, the society quickly threatened action, demanded a formal retraction from the network and denied it had ever been a collection of loons who were convinced Fluoridation of drinking water was a commie plot or that civil rights was a secret plan to establish a negro soviet state. Rachel happily allowed them a couple days of the news cycle to posture before she cited sources and documentation which I speculate she already had on tap when she first called them out hoping they would take the bait.

The Birchers of this generation may have erased or shredded any damming historical files and pamphlets the society posses, but it seems some folks kept boxes of old John Birch memorabilia. The current leaders of the GOP and conservative movement could care less the society is collection of rabid racists and intellectual half wits. Republicans smell blood in the water and they need warm bodies and cold cash as polls proclaim the President and his Party seem to quickly be losing favor with a majority of the electorate that will actually take time to vote in the midterms. 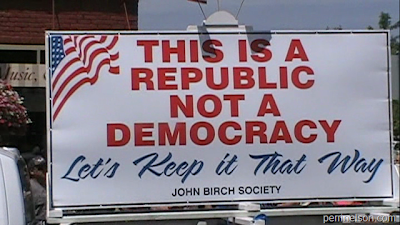 I would like to say it is not so, but the disconcerting augury remains, if we held the election tomorrow, the democrats would lose between fifteen and twenty seats and should the trend continue into the spring, summer and fall, cultivating enough seats to win back control of both the house and Senate is not an unrealistic goal to pursue. Well that’s my view yours may be different.