A Composer's Ties to Nazi Germany Come Under New Scrutiny 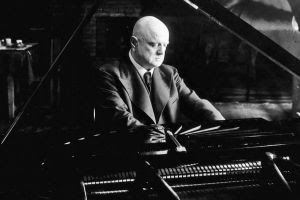 A U. of North Texas musicologist says that Jean Sibelius, shown here in 1934, was an active supporter of Nazism. Other scholars say the claim is overblown.

The composer Jean Sibelius is arguably as important to early 20th-century music as Ezra Pound was to literary modernism. Now, more than 50 years after the Finnish composer died, in 1957, at the age of 91, a musicologist in Texas is claiming that Sibelius was culpably entangled with Nazi Germany, and should join Pound, Richard Wagner, and Louis-Ferdinand Céline in the select group of artists who have been cast into anti-Semitic ignominy.

Sibelius's associations with National Socialism amount to active support of Nazism and its propaganda efforts in Germany and the Nordic countries, says Timothy L. Jackson, a professor of music at the University of North Texas.

Other Sibelius experts say Jackson is making a Nazi out of a man who needed to deal with the Third Reich to earn his living, and who, along with most of the world, was perhaps too complacent about the rise of Hitler.

The role European composers may have played in laying the foundations for the grotesque ethos of Nazism has long been a contentious issue in musicological circles; the heat generated by such discussions relating to figures like Wagner suggests that the emerging dispute over Sibelius may significantly affect both the reception of his music and the way musical Romanticism is viewed in the history of 20th-century cultural life.

Jackson lays out his charges against Sibelius in a long essay in a book he has edited with three colleagues, Sibelius in the Old and New World: Aspects of His Music, Its Interpretation, and Reception, which Peter Lang Publishing Group is set to publish in the first half of next year. Jackson, a specialist in late Romantic composers such as Anton Bruckner, Richard Strauss, and Sibelius, previewed his arguments last month at the annual meeting of the American Musicological Society, in Philadelphia. That has sparked a vibrant e-mail exchange among several Sibelius experts, much of which participants have shared with The Chronicle.

From Sibelius archives and other sources, Jackson has accumulated a mass of documents, letters, government papers, and newspaper reports to challenge the standard take on Sibelius: that he was a passive, apolitical observer of the rise of Nazism and its effects on Europe.

He says Sibelius's early fascination with Finnish mythology and nationalism resonated with Nazism. And, as the Third Reich gained in strength, Sibelius enjoyed its financial arrangements for artists. For example, in 1933, when Joseph Goebbels was named minister of propaganda, Sibelius, already well established and 67 years old, began to profit from taxation and currency-exchange and currency-export preferences that Goebbels approved for artists.

Those were perks of cooperating with the "artist friendly" regime, Jackson suggests. But the Nazis were particularly well inclined toward Sibelius, he adds. For example, Sibelius in 1935 accepted a Goethe Medal that Adolf Hitler confirmed with his signature. From at least 1941, he drew a German pension that was worth half the average German annual income. In 1942, Third Reich officials approved the founding of the German Sibelius Society.

Nazi admiration of Sibelius has long led some music historians to view the composer with suspicion. Jackson is providing more fodder for that unease. He argues that, by going along with all the accolades, Sibelius was committing "a political act of considerable importance to Finland, if not Germany, with a huge propaganda significance."

No single event more clearly illustrates Sibelius's empathy with the Nazi ethos, Jackson believes, than his reneging on his promise to help a young, part-Jewish composer, Günther Raphael. In the years 1931 to 1936, Raphael implored Sibelius repeatedly, urgently, and obsequiously to help him to retain his teaching position in Germany at a time when Jewish artists were being dismissed from their posts.

Jackson insists that Sibelius could have joined the many prominent artists who asked Goebbels to protect favored Jewish colleagues. But he chose not to risk Goebbels's disfavor.

And in mid-1942, says Jackson, when it still seemed that Germany might win the war, Sibelius agreed to be interviewed at his home in Finland by Anton Kloss, an SS war reporter who had most likely taken part in war atrocities. Surely, says Jackson, by that time Sibelius would have heard what the Nazis were doing throughout Europe.

Such actions condemn Sibelius, he asserts, even though the composer did, in late 1943, denounce the Nazis' "bad social prejudices"—quietly, in his diary.

More significant, Jackson says, is that Sibelius continued to take money from Nazi Germany throughout the war, even complaining that payments were not consistently arriving.

Jackson says he believes that Sibelius scholars have viewed Sibelius from a hagiographic rather than historical perspective that is all too common in biographies of great artists—and have, as a result, overlooked that he was less than a saint.

For other Sibelius specialists, however, it is Jackson's perspective that is warped. In telephone interviews, as in their e-mail exchanges with the Texas music historian, they characterize his allegations as a cherry-picking smear campaign.

Consider the age and isolation of Sibelius by the time the war came—he had virtually stopped composing 20 years earlier—suggests one Finnish Sibelius authority, Vesa Sirén. "Keep in mind that we are talking about a bald-headed old man with shaky hands and a cataract in his eye who probably didn't even know what the SS was," says Sirén, a music journalist, author of a study of how Sibelius's contemporaries viewed him, and the editor of the Sibelius estate's official Web site.

Sirén, like Veijo Murtomäki, a professor of music history at the Sibelius Academy, in Helsinki, and a leading authority on the composer, praises Jackson for calling attention to facts of Sibelius's life, such as the monetary value of the well-known favors that he received from Third Reich admirers. But Jackson's claims are consistently overblown and out of context, Sirén and Murtomäki insist.

Take that 1942 interview with the SS reporter. Jackson says it was highly significant, because Sibelius was a recluse who rarely granted press interviews. "Total nonsense," scoffs Sirén. Sibelius agreed to numerous interviews during the 1940s, often at the behest of the Finnish foreign ministry. "He said he wouldn't want to see so many people in his home, but he would, if it was good for Finland," says Sirén. "Sibelius was a great composer and also vain, a little bit childish. But he was also a patriot."

Or consider Jackson's characterization of Sibelius's payments from Germany as being "on the Nazi payroll." Says Sirén: "When the Nazis took over, the last thing on their mind was obeying international copyright laws." Sibelius doggedly pursued his royalties—from Germany, where most were due, as well as from other countries. "We can argue that it would have been better that he said 'I don't want anything to do with Germany,' but still, he was entitled to his copyright money," she says.

And was Sibelius's decision not to help Günther Raphael really proof of anti-Semitism? That claim, says Sirén, ignores that the composer received, and rejected, hundreds of such requests, and by the 1930s had had enough. In fact, says Sirén, Sibelius had given out so many recommendations, motivated by politeness rather than informed by their recipients' qualifications, that "he now felt that he was in the middle of a nest of lies."

Murtomäki, who with Jackson is one of the editors of a forthcoming collection of essays, Sibelius in the Old and New World, contends that the weakness in all his colleagues' criticisms of Sibelius is that they ignore historical context.

One simple example: Jackson's objection to Sibelius's accepting the Goethe Medal, in 1935. Murtomäki asks: Why would Sibelius not accept such honors, given that he was at the time arguably the world's most successful living classical composer, winning honors around the world?

Jackson also ignores the complexity of Finnish views of Germany, contends Murtomäki. He notes that at the beginning of the Third Reich, many Finns believed that Germany not only was improving the lot of its citizens but also was emerging as an effective foil to the Bolshevist threat. In 1939 the Soviet Union attacked and managed to annex part of Finland. So in 1941 Finland allied itself with Germany, hoping to stave off both Nazi and Soviet invasion. But in September 1944, it began the seven-month Lapland War against Germany.

With these turnabouts, Sibelius, too, suffered reversals: At times he was hailed as a standard-bearer of freedom; at others he was decried as a Nazi stooge trading on his Aryan birth. But throughout this vacillation, Sibelius valued his acclaim in Germany, the country that Finns considered a cultural mecca.

"Professor Jackson has some pieces of a puzzle at his hands, but the picture he is constructing with the pieces is rather strange for us who know better the cultural and political situation of Finland during the Third Reich," says Murtomäki.

He allows that Jackson is doing a service to the history of Finnish cultural, scientific, and political relations with German colleagues during the Third Reich. But while Jackson insists that his evidence against Sibelius is more than circumstantial, Murtomäki is not so sure: "So, Sibelius was selfish and flattered by his fame in Germany and wanted the money. I am sorry for that. But it does not make him a Nazi or a great friend of any SS person or acts made by them. History is not that easy."