On John Lennon's Death: Don't Softsoap Me - Gimme Some Truth 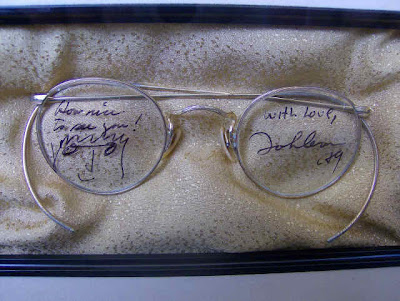 "Martin Lewis ... replays the well-known Nixon-era Hoover harassment scenario ... and manages to skirt verifiable CIA ties to the political murder in Manhattan - not to mention Lennon's infiltrated household, the CIA's alteration of Lennon's journals for purposes of discreditation (they are useless to historians today for that reason), the many attempts on Yoko's life, the Chapman court judgment swayed by mind control psychiatrists on the Agency payroll, the "Operation Walrus" theft of his intellectual property, the disinformation that appears in the press, the many false books that smear his name - a Beatle dead ... "

Martin Lewis has an article that he wrote in 2000, intended for Time magazine, plastered at the Huffington Post, on the death of John Lennon. Lewis, like Jon Weiner before him, is an approved media "expert" on the Beatles (among the many CIA-Mockingbird shows that have featured multiple appearances by Martin Lewis discussing the Fab Four, count CNN’s Talkback Live; Fox News Channel’s O’Reilly Factor, Judith Regan Tonight, Fox Newswatch and Beyond The News; CNBC's Rivera Live and Equal Time; MSNBC’s Hardball, InterNight, NewsChat, NewsFront, Today In America and News With Brian Williams; and Court TV's Crier Report and Cochran & Co. Lewis was also a special correspondent on Court TV's Pros & Cons - offering "satirical takes on the legal news"), doing his level best to hide the truth about John Lennon's death, and discredits the Huffington Post, IMHO:

"It is certainly true that when John Lennon was shot he was immediately eulogized, mythologized and indeed canonized. And if you weren't a follower - or were too young to experience the Lennon impact in 'real time' - you could be forgiven for reacting suspiciously to all the hoopla on every anniversary of his death. I mean he was just a pop singer right? Married to that kooky Japanese woman. 'I'm sorry he died - but why the fuss?' Did we over-react to Lennon's death in 1980? Are we pining for a mythological cipher now? Those are healthy questions ... "

Are these healthy questions when there is an ongoing CIA campaign to discredit Lennon and cover up his murder in the corporate press with its Mockingbird shills, as I detailed in The Covert War Against Rock? "Causes." What were those causes? Lewis again: "For several key years in the late 60s and early 70s - he and Yoko Ono consciously turned their lives into a virtual 'Truman Show' to promote the issues they believed in." If we are going to remember Lennon, shouldn't some discussion of those "causes" and "issues" take place?

Afraid not, let's have only the celebrity image - an ego-syntonic projection of ourselves as spiritual savants of good will - and forget the substance of the man, all he represented.

"I don't begrudge them. The weight of 27 years of soliloquies hangs heavy on the uninitiated. ... "

Who hasn't listened to Beatle music? I've never heard anyone complain that Lennon receives more attention than is his due, with the possible exception of neo-Nazis, but "soliloquies" are precisely my problem. Fans of Lennon revere his memory - they SAY - BUT ASK NO HARD QUESTIONS ABOUT HIS DEATH.

Lewis: "John Lennon was not God." Is this distinction necessary? Is this entire article necessary?

Now the sentimentality - and complete disregard, even disdain for the TRUE LENNON and his message: "But he earned the love and admiration of his generation by creating a huge body of work that inspired and led rather than simply following. The appreciation for him deepened because he then instinctively decided to use his celebrity as a bully pulpit for causes greater than his own enrichment or self-aggrandizement."

Yes, he did. Let us wring our hands, "appreciate" John, who "was not God," but who we "deeply appreciated." Yes? If so ... WHY IGNORE THE FACT THAT THE CIA MURDERED HIM? Why the saccharine sentimentality?

WHY NOT GET DOWN TO WHO CONTROLLED THE PUPPET WHO SHOT HIM?

All evidence is ignored by the fuzzy, warm creatures who "appreciate" John. Few people actually care about Lennon at all, in fact. If they did, there would be widespread insistence on the TRUTH about his death. There isn't.

There are candles. There are songs. There are eulogies. Aren't we all just wonderful people, holding hands and crying in the dark, "remembering" a Beatle who was murdered in cold blood by the repressive state he opposed.

No truth concerning the circumstances of his death. Candles. That is how much the fans actually care about Lennon. They care about warm, sentimental feelings, attach themselves vaguely to ideals that Lennon believed in and have a good cry ...

That is why he died.

Where is the hatred of fascism in those eulogies?

Let's save the the morbid, tear-stained soliloquies for later, and ask those hard questions about Lennon's murder. Lewis: " ... today my eyes are red. My heart is heavy. I will play John Lennon music today. I will watch the video of Lennon insouciantly chewing gum as he sang 'All You Need Is Love' live to 400 million people worldwide by satellite in June 1967. I will laugh as I watch him tweak stuffy pomposity again and again: 'Those in the cheaper seats clap. The rest of you just rattle your jewelry...' And I will weep still more tears at the loss of a man who inspired me in my childhood - and who inspires me to this day ... I'm still inconsolable... '

If so, Lewis - a darling of the CIA-Mockingbird media - should undertake a diligent investigation of Lennon's death for the Huffington Post. Instead, he replays the well-known Nixon-era Hoover harassment scenario (in fact, the entire piece is a redundant hash of events in the life of Lennon everyone already knows), and manages to skirt verifiable CIA ties to the political murder in Manhattan - not to mention Lennon's infiltrated household, the CIA's alteration of Lennon's journals for purposes of discreditation (they are useless to historians today for that reason), the many attempts on Yoko's life, the Chapman court judgment swayed by mind control psychiatrists on the Agency payroll, the "Operation Walrus" theft of his intellectual property, the disinformation that appears in the press, the many false books that smear his name - a Beatle dead ... Don't softsoap me ...

All of the rest is vapid, depressing, self-congratulatory gloss.

What Lennon actually SAID in that song: Imagine that we face fascism and defeat it, so the world can live in peace ...

And even early on: The fascists can rattle their jewelry ...
Posted by Alex Constantine at Monday, December 07, 2009