As opposed to reports earlier this week: "Neo-Nazis 'not behind Auschwitz sign theft'" 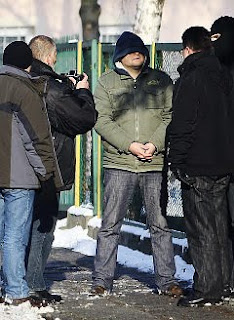 Praszkiewicz/AP - Police question one of the suspects in the Dec. 18 theft of the Nazi death camp sign.

A Swedish neo-Nazi group planned to sell the infamous "Arbeit Macht Frei" sign stolen from the Auschwitz death camp to fund an attack on the prime minister, The London Times reported.

"We are aware of the information about the alleged attack plans," Patrik Peter, a spokesman for the Swedish security police told The Times.

The sign, which means "Work Makes You Free," was stolen Dec. 18 by five men and was later found in three pieces several hundred miles from the camp in Oswiecim, Poland. The thieves, all Polish nationals, were arrested and are being interrogated, Polish police said.

A Swedish newspaper reported that a former leader of a Nazi group said a buyer "was ready to pay millions for the sign."

The unidentified source told Aftonbladet that the money would pay for an attack on the home of Swedish Prime Minister Fredrik Reinfeldt and on the Swedish Foreign Ministry.