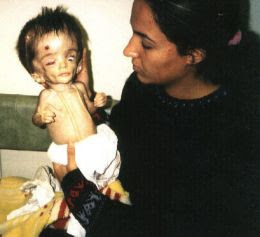 " ... We have seen new kinds of cancer that were not recorded in Iraq before war in 2003, types of fibrous (soft tissue) cancer and bone cancer. These refer clearly to radiation as a cause,' said Jawad al-Ali, an oncologist in Iraq's second city of Basra. In the city of Falluja in western Iraq, scene of two of the fiercest battles between U.S. troops and insurgents after the 2003 U.S. invasion, a spike in the number of births of stillborn, deformed and paralyzed babies has alarmed doctors. The use of depleted uranium in U.S. and coalition weaponry in the 1991 war to liberate Kuwait and the 2003 Iraq invasion is well documented, but establishing a link between the radioactive metal and health problems among Iraqis is hard, officials say. ... "