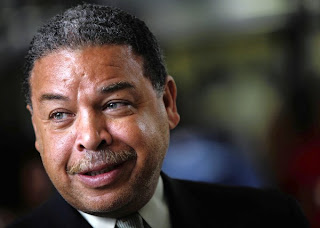 " ... Scott was [a] member of Chicago's 2016 Olympic Bid Committee, a connection that eventually led to scrutiny when it was learned he was involved with two different developments - via his real estate development and investment firm, Michael Scott & Associates, LLC - that were in close proximity to proposed Olympic venues. Chicago 2016 denied there was any conflict of interest. ... "


"His death was ruled a suicide Monday afternoon, less than 12 hours after his body was found on the banks of the Chicago River. But some were left wondering was it really a suicide and how did officials come to such a quick conclusion?"
http://cbs2chicago.com/local/michael.scott.death.2.1317121.html

"NO ONE BELIEVES IT WAS SUICIDE"

" ... Daley and many others close to Scott were shocked at Scott's apparent suicide. Others simply don't believe it.

"I haven't talked to anyone that believes that this was in fact a suicide," said former alderman and WVON radio host Cliff Kelley. ...
http://cbs2chicago.com/local/michael.scott.death.2.1317121.html

The big question? Why didn't Chicago Board of Education President Michael Scott leave a suicide note? "In many instances, a note apologizing to family and loved ones is left behind by a suicide victim," said a top cop source.

The big irony: "The suicide is a shocker. Michael Scott seemed to like himself too much to end his own life," said a Scott observer.

The big probe: Although the Cook County medical examiner's office has ruled Scott's death a suicide, the police will investigate the possibility of foul play. "They will be looking to see if Scott had amended or changed his will recently," said a source.

The big clout: Scott, who has been described as a Mayor Daley "go to" guy, was seated at Daley's table during the 1983 mayoral debate, when Daley and Harold Washington were running against Mayor Jane Byrne in the Dem primary," said a Byrne source.

Body Pulled From River May Be CPS Board President
By Marcus Gilmer
chicagoist.com | November 16, 2009

Media outlets around the city are reporting that a body pulled from the Chicago River near Merchandise Mart early this morning is that of CPS Board of Education President Michael Scott. As of 9:00 a.m. this morning, police have yet to confirm the news but outlets such as the Tribune, Sun-Times, and ABC 7 (where Scott's wife, Diana Palomar, was vice president of community affairs) have reported the body as being Scott's. The body was discovered around 3:15 a.m. and Scott's car was found parked in a lot near the river; the body was pulled from the river around 4:30 a.m. Scott had last been seen yesterday evening around 6 p.m. after visiting his sister in a South Loop care facility, something family members said he did every Sunday. Scott's family later reported him missing. Neither police or the Cook County Medical Examiner's Office have confirmed the body was Scotts, though ABC 7 reports the CCME confirmed the body is an unidentified man, black, in his 50s.

Scott was first appointed to the Board of Education by then-mayor Jane Byrne in 1980. He was appointed again by Mayor Daley, this time as President, in 2001 until 2006. He was re-appointed to the position this past February. Under Daley, Scott also served a stint as President of the Chicago Park District Board. Scott was also a member of Chicago's 2016 Olympic Bid Committee, a connection that eventually led to scrutiny when it was learned he was involved with two different developments - via his real estate development and investment firm, Michael Scott & Associates, LLC - that were in close proximity to proposed Olympic venues. Chicago 2016 denied there was any conflict of interest.

Update: The Trib has updated its story and is reporting that Chicago Police say Scott died of a self-inflicted gunshot wound to the head, his body then falling into the river. Police have recovered the gun.

MIKE SCOTT WAS NOT DEPRESSED OR GIVEN TO SUICIDAL IMPULSES:

... Chicago Mayor Richard Daley visited Scott's family in their West Side home in the morning and spoke afterwards outside the home, expressing condolences to Scott's wife, son and daughter and saying what a shock the death was.

He said he saw Scott at a school-related meeting last week and Scott did not appear troubled at the time.

"He always helped people," Daley said. "He always had a smile, he was always upbeat."

He claims he's not the captain....The Tribune has discovered that Michael Scott has more of an interest in the Olympics than civic pride. Scott, a Chicago 2016 committee member, president of the Chicago Public Schools and a "friend of Richie", also served as a consultant to a condominium developer near the proposed Olympic Village site, a deal that could result in the project being worth far more than it currently is. For his part, Scott says that there's no conflict, given the depth of his role in the project. "I had no financial interest. I didn't do any real work," Scott told the Tribune. This, of course, is all in addition to the story from earlier this summer that Scott owns land located near the proposed Olympic cycling venue, something that Scott and others have said was not a conflict of interest.

Gerald Fogelson, the developer, summed up his relationship with Scott in a way that harkens back to a quainter time in Chicago. "He's a longtime friend. He offices here. He's done us favors. We've done him favors," Fogelson said. ... Fogelson, however, doesn't seem too keen on telling the Tribune the extent of his business dealings with Scott. "I don't feel that it's anybody's business to know all the various real estate and other activities we're engaged in," Fogelson said. "I don't think there's anything improper about that. We try to stay under the radar."

Scott has denied much of a role in the project, even though his office is in Fogelson's building, and he has a Fogelson Properties email address. "I helped them get an emcee and gave them ideas for marketing to the African-American community," Scott said, downplaying his role. "I am not the developer." But former 2nd Ward Alderman Madeline Haithcock remembers Scott differently. "I know Mike Scott. I know he was part of it. He was involved," she said. And her successor Bob Fioretti remembers being impressed when he visited Scott's office in 2007 and saw development plans. "I was like, 'Wow, OK. This explains a lot about who's who and what's what in this city.'

"Public records show that in 2002 Fogelson and Scott formed a partnership -- FS Associates LLC -- to develop city-owned land in the West Side Austin neighborhood into condominiums. Fogelson withdrew from the deal before the project was built, and Scott formed a new partnership with David Doig, former superintendent of the Chicago Park District."
http://www.chicagotribune.com/news/chi-olympic-real-estate-25-sep25,0,2667598.story

" ... the Republican National Committee accused Obama of taking an 'Olympic gamble that only helps his Chicago fat-cat friends.' ... "
http://www.chicagotribune.com/news/chi-olympics-politics03oct03,0,424450.story
Posted by Alex Constantine at Tuesday, December 01, 2009