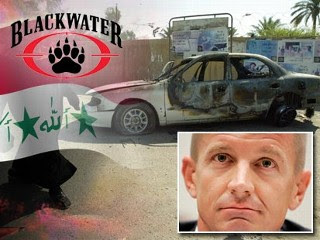 After 9/11, Erik Prince, the ... intensely private founder of Blackwater, applied to work for the CIA. The agency turned him down, Prince tells Vanity Fair in a just-published article, because he lacked "enough hard skills, enough time in the field" to be of use as a spy. The irony is that his company and Prince himself would go on to take part in some of the agency's most sensitive work. Not only was the CIA a Blackwater client but, Vanity Fair reveals, its ex-Navy Seal founder eventually became a "full blown asset."

Three sources with direct knowledge of the relationship say that the C.I.A.’s National Resources Division recruited Prince in 2004 to join a secret network of American citizens with special skills or unusual access to targets of interest. As assets go, Prince would have been quite a catch. He had more cash, transport, matériel, and personnel at his disposal than almost anyone Langley would have run in its 62-year history. ...

Two sources familiar with the arrangement say that Prince’s handlers obtained provisional operational approval from senior management to recruit Prince and later generated a “201 file,” which would have put him on the agency’s books as a vetted asset. It’s not at all clear who was running whom, since Prince says that, unlike many other assets, he did much of his work on spec, claiming to have used personal funds to road-test the viability of certain operations. ...

“Every time an American goes through security, I want them to pause for a moment and think, What is my government doing to inconvenience the terrorists? Rendition teams, Predator drones, assassination squads. That’s all part of it,” Prince tells the author of the Vanity Fair story, Adam Ciralsky, who used to work for the CIA himself. ...