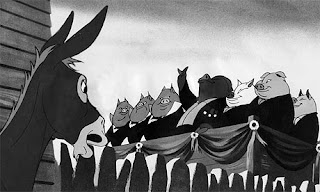 " ... It was Howard Hunt who broke the story that the CIA funded Animal Farm, John Halas and Joy Batchelor’s 1954 version of George Orwell’s political allegory of the Russian Revolution and its aftermath, played out in a British farmyard. Cashing in on his Watergate notoriety, the rogue spook and sometime spy novelist took credit in Undercover: Memoirs of an American Secret Agent (1974) for initiating the project, shortly after Orwell’s death in 1950. The self-aggrandising Hunt may have exaggerated his own importance in the operation – possibly inventing the juicy detail that Orwell’s widow, Sonia, was wooed with the promise of meeting her favourite star, Clark Gable – but, as detailed by Daniel Leab in Orwell Subverted: The CIA and the Filming of ‘Animal Farm’ (Pennsylvania, $55), the operation was real. ... "

THE CIA AND ANIMAL FARM
Posted by Alex Constantine at Friday, December 04, 2009