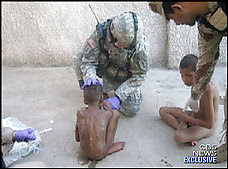 "Abeer Mahdi al-Chalabi, head of the orphanage section of the Ministry of Labor and Social Affairs, denied in a telephone interview that the children had been badly treated and said they were not orphans but were "special needs" children. ... "
-
24 Emaciated Boys Found At Baghdad Orphanage
Iraqi Official Denies Allegations of Abuse
By John Ward Anderson and Dahlia Farooq
Washington Post Foreign Service
Thursday, June 21, 2007; Page A18


BAGHDAD, June 20 -- U.S. and Iraqi troops discovered an orphanage with "24 severely malnourished and abused boys" 10 days ago in the al-Fajr neighborhood of northern Baghdad, the U.S. military said Wednesday. The boys, ages 3 to 15, "were found naked in a darkened room without any windows," the military said in a statement.

Photographs obtained by CBS News, which broke the story Monday, showed emaciated children lying naked on concrete floors in their own waste, some tied to their beds. Nearby, soldiers discovered a locked room with food and clothing. ...