ON THE ROAD TO OPEN FASCIST RULE: "Conservative" Supreme Court Scores a Blow Against Freedom of Speech

" ... the court ... has made it easier for hypercautious school officials to clamp down on a wide range of student speech ... " 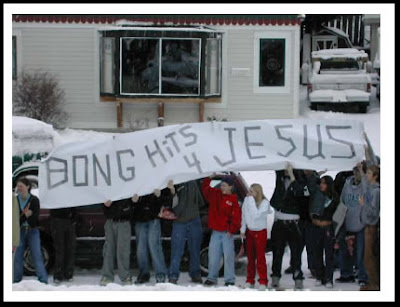 In the 'BONG HiTS 4 JESUS' case, the Supreme Court muddles the message of an important precedent.

ON THE SAME DAY it expanded free speech in the political process, the Supreme Court needlessly narrowed it in the nation's public schools. In upholding the suspension of an Alaska high school student for unfurling a banner declaring "BONG HiTS 4 JESUS" during a field trip, a 5-4 majority drained the life out of one of the court's landmark pronouncements: that children do not "shed their constitutional rights to freedom of speech or expression at the schoolhouse gate."

The quotation comes from Tinker vs. Des Moines School District, a 1969 case in which the court overturned the suspension of students who had defied school officials by wearing black armbands to protest the Vietnam War. Then as now, the notion that schoolchildren would have opinions, let alone the constitutional right to express them, was controversial.

But Tinker wasn't the educational equivalent of putting the asylum in the charge of the inmates. Justice Abe Fortas' majority opinion made it clear that school administrators could limit student speech when it would "substantially interfere with the work of the school or impinge upon the rights of other students." They could not squelch speech simply to avoid "the discomfort and unpleasantness that always accompany an unpopular viewpoint."

"Discomfort and unpleasantness" is a fair description of what school administrators in Des Moines tried to prevent by warning 15-year-old John Tinker and his 13-year-old sister Mary Beth against wearing antiwar armbands. It also describes the result of a decision by 18-year-old Joseph Frederick to hold his bong banner before TV cameras in 2002 as the Olympic torch relay passed through Juneau. As if realizing that this was hard to square with the Tinker ruling, Chief Justice John G. Roberts Jr. emphasized another school-speech precedent: a 1986 case in which the court upheld the suspension of a student who used sexual imagery in a speech at a school assembly. But the bong banner wasn't obscene; it was inane.

In ruling against Frederick, the court has muddled the teaching of Tinker and has made it easier for hypercautious school officials to clamp down on a wide range of student speech, some of which will be more serious than the bong banner. The only saving grace is that two of the justices who signed Roberts' opinion, Samuel A. Alito Jr. and Anthony M. Kennedy, filed a separate opinion in which they said the decision "provides no support for any restriction of speech that can plausibly be interpreted as commenting on any political or social issue" — including "the wisdom of the war on drugs." Alito and Kennedy would have been truer to their concern for free speech if they had dissented outright, as did Justices John Paul Stevens, Ruth Bader Ginsburg and David H. Souter.

Stevens should have the last word on this unfortunate U-turn by the court. He noted that Roberts, in his majority opinion in the issue-ads ruling, had said that when the 1st Amendment is involved, "the tie goes to the speaker." Turning the chief justice's words against him, Stevens argued that in the bong banner case, "the tie would have to go to Frederick's speech, not to the principal's strained reading of his quixotic message."
http://www.latimes.com/news/printedition/asection/la-ed-bong26jun26,1,3505906.story?coll=la-news-a_section
Posted by Alex Constantine at Tuesday, June 26, 2007