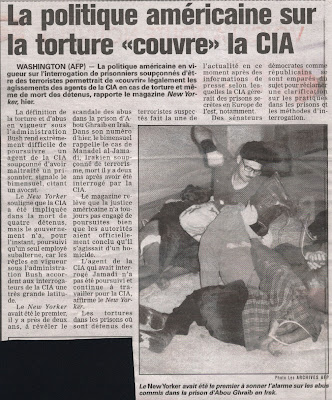 Members of the US Senate Select Committee on Intelligence official website expressed reservations Tuesday about the nomination of John Rizzo as CIA general counsel, questioning the career CIA-lawyer's decision to sign off on the controversial 2002 "Bybee Memo" in which the Department of Justice's Office of Legal Counsel (OLC) defined torture as physical pain equivalent in "in intensity to the pain accompanying serious physical injury, such as organ failure, impairment of bodily functions, or even death."

During a hearing on his nomination, Rizzo, who is currently serving as acting CIA general counsel, said he did not have any "specific objections" to the memo and even in retrospect does not think he should have objected to a memo which he has characterized as being "over broad." Rizzo has served as a CIA lawyer for 32 years and has been acting general counsel since August 2004. President Bush nominated him to oversee the CIA's Office of General Counsel [official website] in March 2006. If confirmed, Rizzo will be the first CIA general counsel ever to come up through the ranks.

The Bybee Memorandum has been an issue for many legal appointees of the Bush administration. In 2005, members of the Senate Judiciary Committee delayed the confirmation of then Attorney General nominee and White House Counsel Alberto Gonzales because of the controversial memo, which was disavowed by the White House in 2004.