Note to John Crewsden: A Zen tautology? - " ... Nobody knows for certain what the Watergate burglars' real motive was, only that they toppled a presidency. ... " The motive WAS to bring down Nixon, John, but in a controlled manner, without exposing the assassinations. - Helpful AC 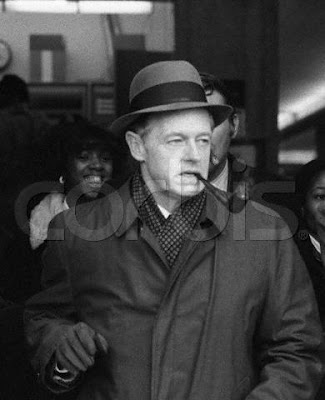 Imagine my surprise. There, in the middle of the CIA's "Family Jewels" was my own name: "Thuermer reported on a call from Mr. Crewdson of the New York Times who said he was 'formally requesting' a photograph of Howard Hunt.

"The DDP observed that we are under no obligation to provide a photograph and Thuermer said he had declined." The date was Aug. 22, 1972--still very early days for Watergate. There had been reports that a man named E. Howard Hunt Jr. was somehow involved in the spreading scandal.

Hunt hadn't been arrested at the Watergate break-in. But one of the five burglars carried an address book with his name and the notation "W. House."

Rumor had it that Hunt was a former CIA man, an ex-station chief in Montevideo, who had worn the white "ice cream" suits favored by Graham Greene characters and wrote bad spy novels in his spare time. As a young reporter for the Times, I was pounding the Washington sidewalks trying to get a handle on the man.

Had the household staff spotted him at the Watergate Hotel, or the Howard Johnson's across the street, on the night of the break-in? The problem was, there were no photographs of Hunt to show to maids and room-service waiters, and Angus Thuermer, the CIA's sardonic spokesman, obviously wasn't going to help us obtain one.

When Hunt was summoned to appear before the federal grand jury investigating the Watergate case, a golden opportunity presented itself. I brought my camera to the U.S. Courthouse in downtown Washington, thinking I would snap his picture as he emerged from the grand jury's chamber.

There were several reporters staking out the grand jury that morning, including Lesley Stahl, a recent addition to the CBS News Washington Bureau. Bright young reporter that she was, Lesley wasn't about to let anything slip past her. Who was the young man standing in the hallway with a camera in his hand? An FBI agent, perhaps, trying to photograph the assembled press for some nefarious purpose? Stahl confronted me, hands on hips, demanding to know who I was and what I was doing with a camera.

Once I explained she relaxed, and as the Watergate story continued to produce stake-outs we became friends. I never did get a picture of Howard Hunt that morning. Ever the professional spy, he had arranged with the U.S. Marshals to slip out the back door.

I eventually got to know Hunt quite well--better than I wanted to--visiting him in prison in Florida several times, and, once he was out, taking him to dinner at a Red Lobster in Miami where he ordered "the biggest lobster in the house."

My extended courtship was in hopes that Hunt would tell me the one thing that hadn't yet been established: why had he and G. Gordon Liddy conspired to break into the Democratic National Headquarters? He never did. Several explanations have been put forth, and some of them persist to this day. Nobody knows for certain what the Watergate burglars' real motive was, only that they toppled a presidency.
Posted by Alex Constantine at Saturday, June 30, 2007