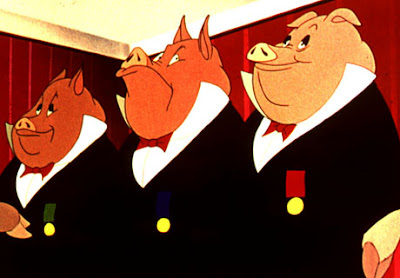 In the annals of American intelligence, the mid-1950s were the golden years: the CIA overthrew elected governments in Iran and Guatemala, conducted experiments with ESP and LSD (using its own operatives as unwitting guinea pigs), ran literary journals and produced the first general-release, feature-length animation ever made in the UK.

It was Howard Hunt who broke the story that the CIA funded Animal Farm, John Halas and Joy Batchelor’s 1954 version of George Orwell’s political allegory of the Russian Revolution and its aftermath, played out in a British farmyard. Cashing in on his Watergate notoriety, the rogue spook and sometime spy novelist took credit in Undercover: Memoirs of an American Secret Agent (1974) for initiating the project, shortly after Orwell’s death in 1950. The self-aggrandising Hunt may have exaggerated his own importance in the operation – possibly inventing the juicy detail that Orwell’s widow, Sonia, was wooed with the promise of meeting her favourite star, Clark Gable – but, as detailed by Daniel Leab in Orwell Subverted: The CIA and the Filming of ‘Animal Farm’ (Pennsylvania, $55), the operation was real.

Leab is a historian who has done extensive research into the production of Hollywood’s Cold War movies; the central figure in his account is Louis de Rochemont, the former newsreel cameraman who supervised Time magazine’s innovative monthly release The March of Time and, beginning in 1945 with The House on 92nd Street, produced a number of so-called ‘journalistic features’ for 20th Century Fox (which were praised by James Agee, among others, for their extensive use of location shooting). De Rochemont was also well connected to various government agencies. The House on 92nd Street dramatised the FBI’s role in arresting Nazi agents; its 1946 follow-up, 13 Rue Madeleine, celebrated the wartime exploits of the Office of Strategic Services, the CIA’s precursor, but a dispute between the studio and the OSS director, ‘Wild Bill’ Donovan, resulted in the organisation’s being disguised as an intelligence outfit called ‘0-77’.

De Rochemont subsequently became an independent producer affiliated with the Reader’s Digest. In 1951, while preparing a new FBI collaboration, Walk East on Beacon (adapted from an article by J. Edgar Hoover originally published in the Digest), he was recruited by the CIA’s blandly titled Office of Policy Co-Ordination to produce an animated Animal Farm. The CIA was already engaged in spreading the Orwellian gospel – as was the clandestine Information Research Department of the British Foreign Office.
(Both agencies had been engaged in making translations and even comic-book versions of Animal Farm and 1984.) Nor were the CIA and the IRD the only interested parties: according to Leab, both the US Army and the producers of Woody Woodpecker cartoons also made inquiries as to the availability of Animal Farm’s film rights.

The trade press reported that de Rochemont financed Animal Farm with the frozen British box-office receipts from his racial ‘passing’ drama Lost Boundaries; in fact, Animal Farm was almost entirely underwritten by the CIA. De Rochemont hired Halas and Batchelor (they were less expensive and, given their experience making wartime propaganda cartoons, politically more reliable than American animators) in late 1951; well before that, his ‘investors’ had furnished him with detailed dissections of his team’s proposed treatment. Animal Farm was scheduled for completion in spring 1953, but the ambitious production, which made use of full cell animation, was delayed for more than a year, in part because of extensive discussion and continual revisions. Among other things, the investors pushed for a more aggressively ‘political’ voice-over narration and were concerned that Snowball (the pig who figures as Trotsky) would be perceived by audiences as too sympathetic.

Most problematic, however, was Orwell’s pessimistic ending, in which the pigs become indistinguishable from their human former masters. No matter how often the movie’s screenplay was altered, it always concluded with a successful farmyard uprising in which the oppressed animals overthrew the dictatorial pigs. The Animal Farm project had been initiated when Harry Truman was president; Dwight Eisenhower took office in January 1953, with John Foster Dulles as his secretary of state and Allen Dulles heading the CIA. Leab notes that Animal Farm’s mandated ending complemented the new Dulles policy, which – abandoning Truman’s aim of containing Communism – planned a ‘roll back’, at least in Eastern Europe. As one of the script’s many advisors put it, Animal Farm’s ending should be one where the animals ‘get mad, ask for help from the outside, which they get, and which results in their (the Russian people) with the help of the free nations overthrowing their oppressors’.

Animal Farm’s world premiere was held at the Paris Theatre in December 1954, then as now Manhattan’s poshest movie-house, and was followed by a gala reception at the United Nations. The movie received respectful reviews – as it did when it opened several months later in London – but performed poorly at the box office. (Its major precursor as a ‘serious’ animation, Disney’s 1943 collaboration with the aviator Alexander de Seversky, Victory through Air Power, was also a flop.) Halas and Batchelor did achieve a reasonable approximation of stretchy, rounded Disney-style character animation but, as the New York Times critic Bosley Crowther observed, ‘the shock of straight and raw political satire is made more grotesque in the medium of cartoon.’ This was a dark cuteness. While praising Animal Farm as ‘technically first-rate’, Crowther concluded his review by advising parents to not ‘make the mistake of thinking it is for little children, just because it is a cartoon.’

Actually, Animal Farm was ultimately seen mainly by schoolchildren – particularly in West Germany. Possibly the movie was perceived by this captive audience as an unaccountably dour and violent version of Walt Disney’s Dumbo. But, however the CIA’s fervent call for an anti-Soviet revolt (with ‘help from the outside’) was received by the world, it was rendered moot some eighteen months after Animal Farm’s European release by the much encouraged and subsequently abandoned Hungarian uprising.
Posted by Alex Constantine at Thursday, June 28, 2007