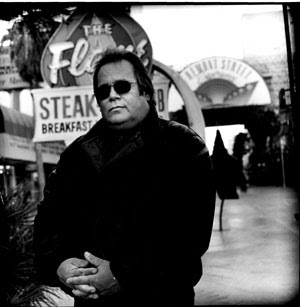 During the 2004 election year, Marc Cooper critiqued Peter Camejo, Ralph Nader's running mate, for his supposed "Trotskyist" ties - an honest denunciation or yet another example of Cooper's demonization of the left? My own investigation of Comejo's past reveals Cooper to be a media confabulator in the business of mass opinion formation.


Introductory notice: Lest anyone walk away with the mistaken impression that I am defaming the name of Marc Cooper, a doyen of the controlled left, by discussing red-baiting tactics and his basic dishonesty (documented below) - serving to discredit leftist leaders - a search of the Internet yields the same observation from a number of independent critics, eg.:

" ... In recent articles, [Marc] Cooper and [David] Corn both volunteer their “advice” in scurrilous red-baiting attacks on the antiwar movement. ... "
http://www.socialistviewpoint.org/dec_02/dec_02_1.html

Glad some of our news wire contributors recognize Cooper as a likely shill for the Dummycrats and the military industrial complex.   Among other things, Copper is an apologist for the Warren Commisson cover-up of the JFK assassination. The full brazzeness of this disinformation has been readily exposed in John Armstrong's 2003 book 'Harvey & Lee."

If more people read Armstrong's book, they'd realize why progress has been in a nose dive for the last 40 years [the exact time period since the publication of the Warren Report in September 1964].
Posted by Alex Constantine at Friday, June 29, 2007