Frontline's Obfuscation of the Iraq War 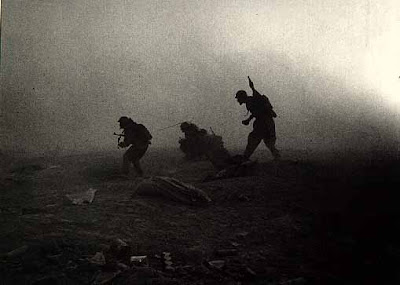 " ... The idea of terrorism engulfing the Middle East was presented sternly and frequently. What was left out was the distinction between terrorist assaults and an insurgency. ... "
-----
Robert Parry is one of the few genuine old school reporters of the stripe of I.F. Stone, Carey McWilliams and George Seldes left on the current political scene. His words on current media coverage of the Cheney-Bush neocon regime are therefore all the more significant through awareness of his background.

In a ConsortiumNews.com June 20 article Parry lays it on the line concerning the paucity of analytical appraisals of the neocon wrecking crew and the damage done to America:

"In years to come, historians may look back on U.S. press coverage of George W. Bush's presidency and wonder why there was not a single front-page story announcing one of the most monumental events of mankind's modern era - the death of the American Republic and the elimination of the `unalienable rights' pledged to `posterity' by the Founders."

Parry pays deference to stories dealing with Bush's denial of habeas corpus rights to a fair trial, his secret prisons, toleration of torture, violation of Fourth Amendment protections against unreasonable searches, "signing statements" that override laws, and the erosion of constitutional checks and balances.

What is totally lacking in Parry's estimation is the type of comprehensive analysis necessary to comprehend the entire picture of just how and why America plummeted to such an abyss.

Parry notes that "historians will scroll through front pages of the New York Times, the Washington Post and every other major newspaper - as well as scan the national network news and the 24-hour cable channels - and not find a single story connecting the dots, explaining the larger picture ... "

Not long ago Parry's think tank, The Consortium, did thoughtful pieces on the PBS Network's highly acclaimed Frontline series on important subjects such as Iran-Contra and the October Surprise, providing facts that the mainstream media essentially left untouched.

After such a promising start Parry ceased to be a part of the Frontline picture. Had Parry been the investigator the Frontline approach to the Iraq War would have been vastly different.

It was a Frontline series that presented a horrifying image of Iraq under Saddam Hussein ready to attack with a sophisticated and extensive variety of chemical weapons.

That series sought to instill credibility to the series by linking the terrifying assertions to the New York Times through extensive comments by Judith Miller, a former Pulitzer Prize winning journalist.

Watching the series conveyed the idea that it was just a matter of time before the "giant mushroom cloud" to which Condoleezza Rice referred would engulf America unless action was taken. A viewer got the impression of a nuclear "High Noon" when Sheriff Gary Cooper had to face down a ruthless gang or lose the town.

The neocon roots were solidly planted. Paul Wolfowitz saw that American taxpayers provided over a million dollars to a glib talking Middle East con man who fed him information he longed to receive.

Ahmad Chalabi was pleased to oblige Wolfowitz and his neocon allies in the rush to war to occupy Iraq, seeking to convince Americans that such conflict involved "us or them" urgency. In terms of Chalabi's credibility, he is so popular in Jordan that an order is in effect that, should he surface there, Chalabi is subject to immediate arrest.

The same Frontline that gave us the Miller-Chalabi horror stories provided more of the same kind of "enriching documentary" in its Tuesday, June 19 edition dealing with the Iraq War entitled "Endgame."

Conspicuously missing from a report that was presented in the trappings of documentary journalism was any mention of the Project for the New American Century and the importance of Iraq occupation, something that made its way into its position papers prior to Bush's emergence in the White House in January 2001. Wolfowitz, Richard Perle and William Kristol had all been part of that process.

Also conspicuously missing was the debate over whether alleged "weapons of mass destruction" existed in Iraq. There was no discussion over how Cheney and Bush rushed America into war before the UN weapons inspection team headed by Hans Blix could finish its work. Nor was there any discussion that the entire pretext for invading Iraq was false, the idea that America was protecting itself from imminent invasion.

The idea of terrorism engulfing the Middle East was presented sternly and frequently. What was left out was the distinction between terrorist assaults and an insurgency.

Needless to say, there was no footage from the interview that General Norman Schwarzkopf gave to Phil Donahue on MSNBC before Iraq was invaded, in which the military commander of Desert Storm in the 1991 Gulf War explained what would happen if we sought to occupy Iraq. It was so prescient that it could be easily run as a current news report.

One thing that was learned from watching a Frontline propaganda piece presented as "documentary journalism" was that the same old tragic arguments from the Vietnam War are alive today with neocons and elements of the military.

Listening to interviews of retired General Jack Keane and Colonel William McMaster was reminiscent of the days when Richard Nixon assured us that a turning point had been achieved when American forces moved into Cambodia to wipe out Viet Cong sanctuaries.

Keane expressed "cautious optimism" that Bush's current "surge" can turn things around and that planning shortcomings have caused current difficulties in Iraq. He has even supplied a map recommending how Baghdad can be protected, thereby defeating insurgent tactics.

Colonel McMaster is confident that the recent counterinsurgency in Tal Afar and surrounding Ninawa Province that he helped direct is reflective of what can be accomplished throughout Iraq with proper tactical application and vigilance. It is significant to note that McMaster authored the book "Dereliction of Duty" that criticized American military leadership during the Vietnam War.

In Vietnam the information that President Dwight D. Eisenhower suppressed from the American people was that a poll conducted by our own CIA in 1955 revealed that if an election had been held throughout the nation that Communist leader Ho Chi Minh would have emerged with 90 percent of the vote.

The issue was far broader than tactical mistakes by American leadership and extended to the preferences of the Vietnamese people.

In Iraq a comparable situation exists. The Arab world does not wish to be occupied by America. Resistance as a result continues to grow, as does disaffection with the American presence among the Iraqi population.

The wishful thinking of Keane and McMaster pursues an impossible dream while they and their allies sip the same kind of Kool-Aid that Nixon provided while Vietnam tragedies abounded.