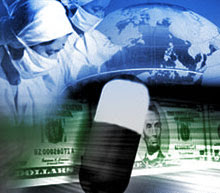 (GIN) - The pharmaceutical company Pfizer has been hit by charges that it carried out improper trials on Nigerian children for an anti-meningitis drug. The Nigerian government is demanding $7 billion in damages for the families of children who allegedly died or suffered side-effects after being given Trovan. The firm denies any wrongdoing, saying the trials were conducted according to Nigerian and international law.

The government says the children were injected with the drug without approval from Nigerian regulatory agencies. A separate case in the city of Kano—in which the state is seeking 2.7 billion in compensation—has been running for more than two years. On June 4, judges postponed that trial by a month, to allow the firm to appear before the Kano court. Trovan has been approved for use by adults, but not children, in the United States.
--
"We did not suspect that our children were being used for an experiment
Hajara's father ... "

In school, Anas Mohammadu's mates call him "horror" and make fun of him.
When the 14-year-old goes to bed at night, he dreams of becoming a soldier.

His father, Muhammadu Mustapha, knows his son's dream is unlikely to come true.

"It's only a pipedream. You don't become a soldier with weak and wobbly legs and a permanently drooling mouth," he says bitterly.

"He tires too quickly. The other day, he was trying to draw water from a well and the small bucket almost pulled him into the well."

But Anas is lucky to be alive.

Many other children who were used in the controversial 1996 drug trial by US pharmaceutical giant Pfizer died.

Anas, then only three years old, was the first child to be given the experimental antibiotic Trovan at the Infectious Diseases Hospital, Kano, during the drug trial.

Pfizer tested the then unregistered drug in Nigeria's north-western Kano State during an outbreak of meningitis which had affected thousands of children.

Officials in Kano say more than 50 children died in the experiment, while many others developed mental and physical deformities.

But Pfizer says only 11 of the 200 children used in the drug trial died.

"From our records, the fatalities were only 11, but the survival rate was 94 per cent," Pfizer spokesman in New York, Bryant Haskins, told the BBC News website.

Following pressure from rights groups and families affected by the trial, the Nigerian government set up an expert medical panel to review the drug trial.

The experiment was "an illegal trial of an unregistered drug", the Nigerian panel concluded, and a "clear case of exploitation of the ignorant".

Pfizer denies any wrongdoing and reiterates its position that its trial of Trovan was conducted in accordance with Nigerian regulations.

"These allegations against Pfizer, which are not new, are highly inflammatory and not based on all the facts," Mr Haskins, recently told Reuters news agency.

He also said the trial had helped save lives.

The company has previously said that "verbal consent" had been obtained from the parents of the children concerned and that the exercise was "sound from medical, scientific, regulatory and ethical standpoints".

But Mr Mustapha is still burning with anger.

"My son was ill and we took him to the hospital like any other family would. Then the Americans and some local Nigerian doctors injected Anas with this evil drug."

Another man, Hassan Sani, says his daughter Hajara, 14, was also given the drug.

He says the pill made his daughter deaf and unable to speak, and he wants the doctors involved to be treated as criminals.

"The American doctors took advantage of our illiteracy and cheated us and our children. We thought they were helping us," Mr Sani says.

"We did not suspect that our children were being used for an experiment. They have cheated us and our children. All I can say is that God will judge them according to their evil deeds.

"Where there is a crime, there must be punishment."

After more than a decade of silence, the Nigerian government has decided to sue Pfizer, seeking $7bn (£3.5bn) in damages for the families of children who allegedly died or suffered side-effects in the experiment.

But Mr Sani says compensation will not be enough.

"In addition to the compensation, they should be killed like the children they have killed," he says.

The Pfizer experiment was cited by many as a reason for the mass rejection of polio vaccinations in many parts of northern Nigeria in recent years.

Some local Islamic preachers said there was a western plot to sterilise Muslim women.

After several tests were carried out to proving the vaccine's safety, the programme has now been resumed.

Whether the families ever receive compensation, it will never be enough to bring back Anas's lost dreams of becoming a soldier.
Posted by Alex Constantine at Friday, June 22, 2007