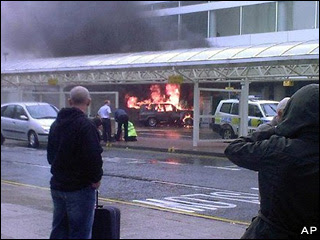 " ... The witness said the car was being driven 'erratically' before the minor crash. The driver was not stopped ... Every major IRA bombing in England and Northern Ireland has had the fingerprints of the British government and the FRU all over it. ... "

Intelligence sources are refusing to rule out an Irish connection to a massive car bomb that was discovered in the heart of London this morning. Though at this early stage the facts are sketchy, any link to the IRA or its offshoots would re-open a can of worms concerning the MI5's role in past terror attacks, and specifically car bombings, over the last few decades in Britain and Northern Ireland.

The timing of the attempted attack coincides with new Prime Minister Gordon Brown taking over from Tony Blair just yesterday.

"The threat of terror returned to London today after a large car bomb was found in the heart of the capital," reports the Daily Mail.

"Bomb squad officers defused the 'massive' device after police investigated reports of a suspicious vehicle in the early hours."

"According to an eyewitness the door staff at the nightclub Tiger, Tiger alerted police after the car, believed to be a silver Mercedes, was driven into bins last night and the driver ran off."

"The witness said the car was being driven 'erratically' before the minor crash. The driver was not stopped."

In any criminal investigation and in particular terrorism inquiry, it is paramount to look at who has the motive and history to carry out such an attack.

It is important to stress that not every terror attack is necessarily part of some elaborate scheme or conspiracy - indeed it is usually small scale incidents such as this that are the work of lone extremists or Islamic fundamentalists who hate the west, of which Britain is inundated with.

But as the facts emerge we would be foolish to overlook the fact that the British security services were intimately involved in numerous terror attacks in Britain over the past few decades, namely car bombings, that were blamed on the IRA or its offshoots. This is particularly relevant considering that officials have refused to rule out an Irish connection in this case. 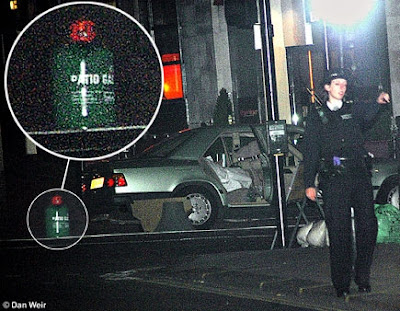 The sliver car was left outside the Tiger Tiger nightclub on Haymarket. A gas canister can be seen in the bottom left-hand corner of this picture.
Every major IRA bombing in England and Northern Ireland has had the fingerprints of the British government and the FRU all over it.

Starting from at least the 1980's, SAS and British military intelligence agents were routinely ordered to embed themselves within violent branches of the IRA and aid terrorists in carrying out attacks. How do we know this happened? Because one of the individuals who was ordered to do so, Kevin Fulton, blew the whistle on the fact that he was told he had the Prime Minister's blessing to aid terrorists in bomb making and political assassinations.

In addition, mirroring the backdrop of the infiltration of the alleged liquid bomb plot , the August 15th 1998 Omagh bombing was allowed to proceed despite the fact that MI5 had fully infiltrated the Real IRA terror cell, knew the date of the bombing, and had tracked the terrorists' vehicle as it was driven to the bomb site. Again, in this case MI5 had one of their own agents within the bomb squad itself . In this instance, the car bombing went forward and 29 people, including two babies and nine children, were ripped apart as they shopped in a quiet market street.

Documents , lodged as part of a court action being taken against the British government by a disgruntled military intelligence agent, also revealed that an FRU (Force Research Unit) major was the officer who was the handler of the British army's most infamous agent inside the IRA -- a man code named Stakeknife.

Stakeknife is one of Belfast's leading Provisionals. His military handlers allowed him to carry out large numbers of terrorist murders in order to protect his cover within the IRA.

The London Observer further revealed some of the methods employed by the FRU in Northern Ireland, including the “human bomb” technique, which involved “forcing civilians to drive vehicles laden with explosives into army checkpoints”.

Former MI5 counter-terrorism officer David Shayler also saw documents indicating that the Israeli's bombed their own embassy in London in 1994 after a car bomb exploded outside the building in Kensington.

He also presented evidence that MI5 had foreknowledge of the 1993 Bishopsgate car bombing that was blamed on the IRA, and could have apprehended the bomb squad but let the attack go ahead.

To forget the proven history of the security service's involvement in car bombings and other terror attacks in Britain and Northern Ireland in light of this latest incident would be very naive, and as more information about the culprits behind this morning's attempted attack is released, that history is likely to become more prescient.