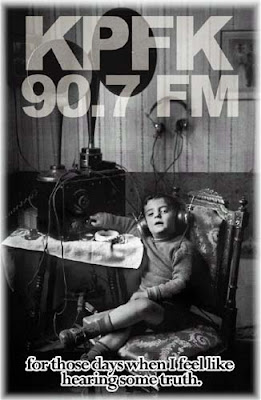 INTRODUCTORY NOTE: (This is a repost - part three is culled from a series I've revamped and expanded.) The former controlling advisory board of KPFK-FM, Pacifica's affiliate in Los Angeles, was apprised of every charge made in this and other of my written complaints. None have denied my documented plaints, and as one recently-elected KPFK board member opines with a look that tells me I'm a little naive: "You can interpret the silence as confirmation ... "

Other board members and programmers at Pacifica are aligned with me in objecting to intelligence activity in and around the listener-supported network. 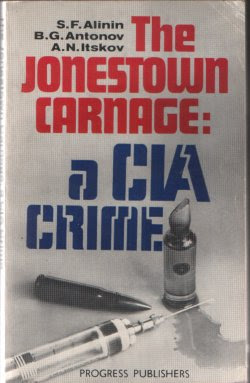 Media fraud, opinion formation, deliberate abuse of the public airwaves ... these are highly unethical when engaged in by a corporate media outlet, unconscionable in a listener-supported radio station. Yet the officers and board of KPFK-FM allow certain talk show hosts in the station's employ to defraud its listeners on a routine basis.

My complaints and those of other listeners and even Pacifica programmers have fallen on deaf ears, and the abuse continues. 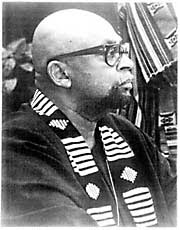 Racial separatist Ron Karenga, promoted as an icon of the left by some KPFK program hosts, is a CIA-FBI cut-out who served time for physical assault and rape, and was involved in the disruption and assassination of Black Panthers. He was a provocateur. 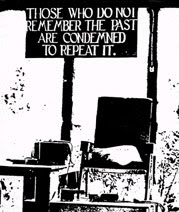 Another of the CIA liars who have been welcomed with open arms at Pacifica was Hugh Fortsyn - an extortionist and collaborator in murder as a lieutenant of Jim Jones in California. How much listener support would KPFK draw if its listeners knew that a CIA death squad leader – disguised as a concerned liberal Christian – was promoted by Larry Bensky, a senior programmer based at KPFA-FM in Berkeley, over THEIR airwaves, repeated over KPFK's transmitter?

On the November 16, 2004 broadcast of "Sunday Salon," an admiring Larry Bensky - shills at Pacifica always seem to fawn over covert operators - shared the microphone with Reverend Hugh Fortsyn, formerly an assistant to Jim Jones at the genocidal Peoples Temple, a CIA mind control operation. 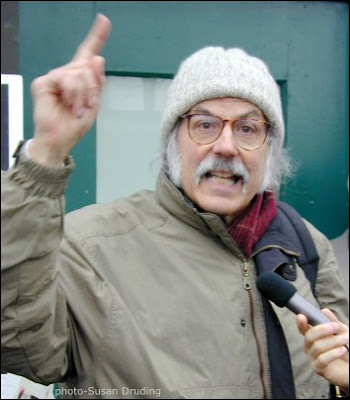 Mr. Bensky was highly sympathetic to Rev. Fortsyn's claim that the CIA had no role in Jonestown apart from infiltration and harassment of the church - a blatantly FALSE claim first made by Jones himself to obscure the true sponsor of the Temple, distance himself from the Agency, and con progressives into supporting his activities.

Pacifica's Larry Bensky sneers at any mention of fascism on his program, and most especially despises the "conspiracy theorists" who trace CIA connections to Jonestown, the Kennedy assassination, etc.

Most listeners, of course, have never heard of Hugh Fortsyn, and had no way to guage the disinformation planted on Bensky's "Sunday Salon."

THE CULT THAT DIED, a book on Jonestown penned by George Klineman, Sherman Butler and David Conn (G.P. Putnam, 1980, a book of some but limited insight into intelligence connections at the Temple), offers a graphic profile of the reverend. We find that Fortsyn participated in a murder. The victim was Chris Lewis, an ex-con, heroin addict and a Jones bodyguard who trained agents of the Temple in breaking, entering and fencing stolen goods. (The break-ins were conducted around the Bay area - largely for the purpose of gathering information useful to Jim Jones, although personal belongings were also stolen to disguise the true nature of the crimes.)

Chris Lewis was gunned down by two assailants outside a Peoples' Temple thrift shop on December 10, 1977.

The murder was used to frighten and control Temple parishioners who refused to cooperate with Jones.

Wade and Mabel Medloc, for instance.

Two weeks after Lewis was shot and killed, Marcelline Jones, another assistant to Jim Jones, ordered the Medlocks to move to Jonestown in French Guyana. The Medlocks refused.

The Medlocks responded by suing the Temple, accusing Jones, Fortsyn and others of attempting to extort $135,000 in real estate from them. In the lawsuit, two members of the Peoples Temple, Jim Crokes and Jim McElvane, were identified as the killers of Chris Lewis.

Police never questioned these two, known to Temple insiders as participants in the Temple death squad, the "Angels of Death."

Rev. Fortsyn is an accomplice in the murder, legally speaking, at the very least, since he obviously had knowledge of it that he has not shared with police. The threats that Reverend Fortsyn made against the Medlocks in a failed effort to exort their wealth would suggest that he knows much more than he admits, that he was, in fact, involved in the deep corruption at Jonestown.

Bensky himself has reviled as lying fools any listeners who have called to share information on CIA involvement in fascism, a connection he finds ludicrous and rejects with extreme unction.

But then fraud is a staple of KPFK programming ....
Posted by Alex Constantine at Saturday, June 23, 2007