" ... His work on behalf of fugitive financier Marc Rich was the basis of Rich's outrageous pardon in late 2000 by Bill Clinton. ... "

The Bush Beat
by Ward Harkavy

Scooter Libby's fan club includes people with vast experience in presidential pardons. And why not? His work on behalf of fugitive financier Marc Rich was the basis of Rich's outrageous pardon in late 2000 by Bill Clinton.

Fundraisers for both Clintons — Hillary and Bill — were also connected to Rich. The financier and his wife Denise poured in huge sums to both Clintons. Supposedly, Libby asked Hillary buddy Denise Rich to lobby Bill for the pardon.

So, consider Libby's current position: Convicted of obstruction of justice and lying while you're the top aide to the most powerful vice president in U.S. history? No problem.

Scooter was Rich's lawyer for 10 years, and you know what happened to Rich: Clinton pardoned him, and the aptly named Rich paid $100 million to get his charges dropped.

During hearings in early 2001 on the Rich pardon, Libby was already Dick Cheney's top aide, so Republicans and Libby's lawyer pals who also worked for Rich frantically argued that Libby hadn't had anything to do with the pardon. Don't believe it.

Considering that we've been at war all these years since then — longer than our involvement in World War II — you're forgiven if you've forgotten about Rich. Like Cheney, he's no ordinary goniff. He fled the U.S. in 1983 for Switzerland while being prosecuted for not only tax evasion but also for making illegal oil deals with Iran.

One of Libby's advocates in the letter-writing campaign publicly released by Judge Reggie B. Walton was New York lawyer Robert F. Fink, who helped secure Rich's pardon. In the pre-pardon days, Fink and Libby worked closely together on Rich's case, Fink wrote. But by the time earnest negotiations started for the pardon, Libby was working on the incoming Bush regime's transition team. Fink's letter, which calls Scooter "a model for the legal profession," notes:

While I worked on the Marc Rich pardon, Scooter did not.

Technically, Fink is probably right — at least by lawyer standards. But Henry Waxman, the California Democratic representative who has been an admirable gadfly since the start of the Bush regime, begged to differ back in March 2001.

During hearings on the disgraceful pardon of Marc Rich, Waxman insisted on having the chance to grill Libby, the newly appointed top aide to Cheney, about the pardon. Waxman noted during a March 1, 2001, hearing:

Since Mr. Libby was Marc Rich's lawyer for more than 10 years and helped develop the argument that was ultimately presented to the president as a justification for his pardon, we felt he should testify. And I regret he's been placed on the agenda for today so far down that we won't hear from him for at least four hours, and probably not until nightfall.
Later in the hearing, Waxman had this exchange with Jack Quinn, the pal of the Clintons who led the pardon push for Rich:

WAXMAN: Well, I really don't want to get into all the details of [Rich's blizzard of legal maneuvers to get a pardon], because I don't see how it's really particularly important. Mr. Rich was able to hire lots of lawyers. They were going in every way they could to help their client. And at some point, lawyers sending all sorts of e-mails came up with the idea that you could go in and get a pardon, if you could work at it and convince the president.

But the thing I want to ask you is this: You made a case to the president that persuaded him, and that case was based on the indictment not being a valid indictment. Who prepared that argument? Who came up with that theory? Was that you or did someone else do that on behalf of your client?

QUINN: Well, it grew out of a lot of working going back a good many years. The chief architects of that argument, in my view, were Larry Urgenson, who had been in the Reagan Justice Department, Mr. Libby, who will be here with you...

WAXMAN: Scooter Libby, who's now the chief of staff to Vice President Cheney?

QUINN: Yes, sir. A partner of his named Mike Green. Mr. Fink, himself.

WAXMAN: So when it was reported in the press that Scooter Libby and some of these Republican lawyers didn't have anything to do with the pardon, that might have been accurate, but they helped develop the theory that you advanced to the president to convince him to grant this pardon.

QUINN: Yes. And I don't want to speak for Mr. Libby. That wouldn't be fair.
As it turned out, Bill Clinton himself had publicly said, in a February 18, 2001 op-ed in the New York Times, that Libby agreed with the pardon of Rich. Here's the part that drew howls from the newly installed Bush regime:

. . . the case for the pardons was reviewed and advocated not only by my former White House counsel Jack Quinn but also by three distinguished Republican attorneys: Leonard Garment, a former Nixon White House official; William Bradford Reynolds, a former high-ranking official in the Reagan Justice Department; and Lewis Libby, now Vice President Cheney's chief of staff . . . 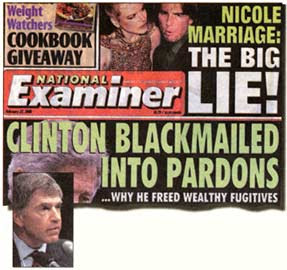 Despite the howls, there's no doubt that Libby's argument on behalf of Rich was the basis for the pardon. Here's a lengthy exchange between Waxman and Libby later in the March 1 hearing in which Waxman nails that point:

WAXMAN: Mr. Libby, I want to ask some questions of you, because you've had a long involvement with Mr. Rich, and probably better than any other witness that we've had before us, would understand the merits of the case that Mr. Rich was offering in his defense. 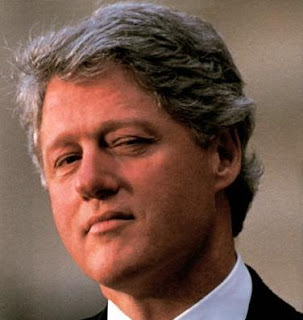 The president of the United States wrote an op-ed in the New York Times. And in that op-ed, he said — or implied — that you had advocated for a pardon. And I understand that's wrong. And you've stated you had no involvement in the effort for a pardon. Is that correct?

LIBBY: It's correct that it's wrong, sir.

WAXMAN: OK. The first — but the president gave other reasons. And the first reason the president gave was, and I quote, "I understood that the other oil companies that had structured transactions like those in which Mr. Rich and Mr. Green were indicted, were instead sued civilly by the government," end quote. Was the president right about this statement?

LIBBY: Yes, sir. There were other companies which had similar transactions. And to the best of my knowledge, those were generally handled civilly.

WAXMAN: The second reason the president gave, was — and then I quote again from him — "I was informed that in 1985, in a related case against a trading partner of Mr. Rich and Mr. Green, the Energy Department, which was responsible for enforcing the governing law, found that the manner in which the Rich-Green companies had accounted for these transactions was proper."

WAXMAN: Was the president right about this statement?

LIBBY: Yes, sir, I believe he was. And that would be the Arco proposed remedial order, issued by the Department of Energy.

WAXMAN: The third reason the president gave was, quote, "two highly regarded tax experts, Bernard Wolfman of Harvard Law School, and Martin Ginsberg of Georgetown University Law Center, reviewed the transactions in question, and concluded that the companies were correct in their U.S. income tax treatment of all of the items in question, and that there was no unreported federal income, or additional tax liability attributable to any of the challenged transactions," end quote. Was the president correct about this?

WAXMAN: The fourth reason the president gave, was, quote, "in order to settle the government's case against them, the two men's companies had paid approximately $200 million in fines, penalties and taxes, most of which might not even have been warranted under the Wolfman-Ginsberg analysis that the companies had followed the law, and correctly reported their income," end quote. Was the president correct on this statement?

WAXMAN: The fifth reason the president gave was, quote, "The Justice Department, in 1989, rejected the use of racketeering statutes in tax cases like this one," end quote. Was the president right about this?

LIBBY: That's my understanding of the Justice Department manual.

WAXMAN: Well, Mr. Libby, it appears that you agree with most of the points that the president made. Let me ask you the bottom-line question.

WAXMAN: And therefore, that there should not have been a criminal liability.

LIBBY: Based on the evidence available to the defense, that would be correct, sir. So, in the eyes of ultimate lawyer Scooter Libby, Marc Rich was a victim of a wanton government prosecution.

With this kind of experience in pardons, Libby's a cinch for one himself.
http://villagevoice.com/blogs/bushbeat/archive/2007/06/libby_and_pardo.php
Posted by Alex Constantine at Sunday, June 17, 2007