Deutsche Bank and the Enron Scandal

" ... Deutsche Bank is accused of helping Enron set up an off-the-balance sheet partnership with a company called LJM, which was run by Enron executives. LJM was used to buy up Enron stock and assets in order to inflate earnings and prevent stock prices from dropping. ... "

Why is Deutsche Bank accused of fraud? 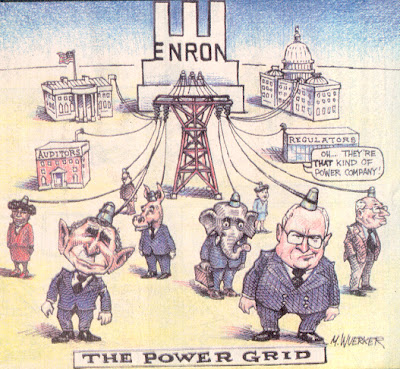 Deutsche Bank has been named in several securities fraud cases, the most high profile of which is the Enron scandal. Deutsche Bank is accused of helping Enron set up an off-the-balance sheet partnership with a company called LJM, which was run by Enron executives. LJM was used to buy up Enron stock and assets in order to inflate earnings and prevent stock prices from dropping. Deutsche Bank is one of several banks accused of giving large amounts of money to prop up LJM and of giving investors unsound advice about the value of Enron’s stock. In addition, Deutsche Bank’s U.S. subsidiary, Bankers Trust Corp., has been accused of setting up several illegal transactions in order to manipulate the tax code in Enron’s favor. Enron allegedly went four years without paying taxes, in part because of Bankers Trust’s actions.

Bankers Trust Corp. has been a source of controversy for Deutsche Bank before. The German bank acquired Bankers Trust in 1999, but in the course of the buyout then-Deutsch Bank Chairman Rolf-Ernst Breuer was accused of intentionally misleading investors. Breuer allegedly told an interviewer that no merger was planned between Deutsche Bank and Bankers Trust even though he was engaged in talks about just such a takeover at that time. This announcement caused Bankers Trust stock prices to drop. But when the merger was finally made public, stock prices jumped. A class action lawsuit was filed on behalf of investors who lost money during the time period between Breuer’s allegedly deceptive statement and that time at which the merger was officially made public.

Deutsche Bank has been implicated in another securities fraud case more recently. In late 2001, a fraudulent stock loan put Stockwalk Group, Inc., a brokerage firm in the Twin Cities area, in deep debt and led it to eventually file for bankruptcy. Deutsche Bank has been accused of being involved in the fraud, which involved a California telemarketing company. It denies the allegation.

What is the current status of these cases?

Deutsche Bank was the only financial institution whose motion to be dismissed from the Enron shareholders case was successful. One law firm was also dismissed. Deutsche Bank’s Enron woes are not over, however. The Securities and Exchange Commission (SEC) has been asked to look into the actions of Deutsche Bank’s subsidiary, Bankers Trust. The latter has been accused of supporting illegal Enron transactions in order to help the energy giant cheat on taxes.

A lawsuit has recently been filed by an attorney for the Securities Investor Protection Corp. that accuses Deutsche Bank of fraud in the Stockwalk Group scandal. Deutsche Bank is one of a number of defendants in the case. The lawsuit brings into play the Racketeer Influenced Corrupt Organizations Act—a law typically used to prosecute members of organized crime. Beyond the $250 million lost by investors, the lawsuit is seeking $500 million in punitive damages.
Posted by Alex Constantine at Saturday, June 30, 2007