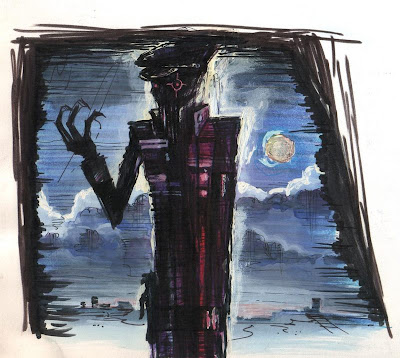 Lower Manhattan is receiving a boost, as Mayor Bloomberg and Governor Spitzer are expected today to announce that JPMorgan Chase & Co. will build and occupy a skyscraper of about 50 stories at the edge of the World Trade Center site, according to people familiar with the plans.

The financial giant is said to be paying about $300 million to the Port Authority of New York and New Jersey for a long-term lease. It would construct a 1.3 million-square-foot office tower on the site at 130 Liberty St. after the Deutsche Bank building is demolished.

Coupled with the construction of a new Goldman Sachs headquarters in Battery Park City, to be completed in 2009, and a mostly leased 7 World Trade Center building, completed in 2006, the move by JPMorgan serves as a telling vote of confidence for downtown, an area that was by no means guaranteed a comeback after the terrorist attacks of September 11, 2001.

In the months that followed, numerous firms in the financial industry fled to Midtown and elsewhere, depressing rents and rendering the future of the area uncertain. As the economy and demand for real estate has surged, so too has the demand for office space downtown— just months ago, real estate insiders expected the site at 130 Liberty St. to become an apartment building.

"It's great for Lower Manhattan," the CEO of the Partnership for New York City, Kathryn Wylde, said. " JPMorgan Chase, as it's called, is the consolidated result of four major banks that were headquartered in Lower Manhattan for many years," Ms. Wylde added, praising its return to the financial district.

Real estate analysts say the new development will serve as a catalyst for greater growth in the area, adding to downtown's momentum.

"You couldn't have asked for a greater adrenaline boost in an already strong market," a director for Real Capital Analytics, Daniel Fasulo, said. "I really think that announcement is really just going to be the engine for future activity downtown."

The building is likely to be both a blow and a boon for the developer of three towers yet to be built at the World Trade Center site, Larry Silverstein. Mr. Silverstein did not land the financial giant in one of his buildings, though the new tower is sure to inspire confidence in the site from the private sector and damp down fears that his buildings will flood the downtown market with an oversupply of office space. Mr. Silverstein owns towers 2, 3, and 4, while the Port Authority holds rights to the Freedom Tower and Tower 5, the site where JPMorgan will build.

Mr. Silverstein also owns 7 World Trade Center, which is currently about 70% leased, though a person familiar with negotiations says the developer is far along in talks to lease the top floors, accounting for virtually all of the remaining space.

Community members have expressed concern about the possibility of trading floors in the new tower cantilevering over an adjacent park, which they say would block sunlight and change the site plan.

"The master plan had the park designed in a certain way," the chairwoman of the World Trade Center Redevelopment Committee at Community Board 1, Catherine McVay Hughes, said. "The big concern is, if the cantilevering is there, will there be shadows in the surrounding community on the park there, in the memorial and on the other residential and commercial buildings?"

Approval of the deal would need to come from the Port Authority board, and any modifications to the environmental impact statement for the site would need to be accepted by the state-run Lower Manhattan Development Corporation.
--------------
THE RIGHT-WING RELATIONSHIP OF CHASE MANHATTAN & JP MORGAN
by Robert Lederman 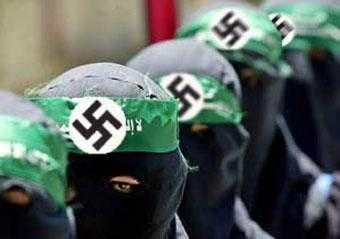 The Rockefeller family's Chase Manhattan Bank has as its motto, "Chase: The right relationship." As Chase is on the verge of buying J.P. Morgan and becoming the world's richest bank, it might be timely to explore a bit of the history behind that slogan. Chase Bank actively supported the most viciously racist regime in world history, Nazi Germany's Third Reich. Unlike many other banks which also have done business with murderous regimes, Chase's involvement was much more than just a business arrangement. Morgan Bank has a similar history of closely working with Hitler and advocating Nazism both before and throughout WWII.

Chase Bank, its owners, the Rockefeller family and the family's other main business--Standard Oil (now known as Exxon)--were an integral part of Hitler's war effort. Rockefeller, Standard Oil and Chase Bank helped put Hitler in power, helped him build the world's deadliest army, supplied him with oil throughout the war, and after the war helped the Nazi elite to smuggle billions of dollars stolen from Holocaust victims and Nazi-occupied countries out of Germany and into Swiss and Latin American banks.

The powerhouse of Germany's war industry was I.G. Farben, the chemical company that patented and manufactured Zyklon-B, the nerve gas used in Auschwitz. The relationship of I.G. Farben to Auschwitz went much deeper than Zyklon-B. Auschwitz was built by I.G. Farben as a slave labor camp that manufactured rubber and other materials for the Nazi war effort and "recycled" gold fillings, human hair, and other substances derived from those worked to death or killed in the gas chambers. At the end of WWII, I.G. Farben was transformed into BASF, Bayer, and Hoescht.

In America Rockefeller/Chase's most influential front may be the Manhattan Institute, a right wing think tank founded by former CIA director William Casey after he helped bring thousands of former Nazis to America following WWII. The Manhattan Institute is the origin of every racially-biased, constitution-violating policy Mayor Rudolph Giuliani has instituted in New York City during the past six years.

Among the resident scholars associated with the Institute is Charles Murray, author of The Bell Curve. This controversial book advances the idea that African Americans are genetically and intellectually inferior to Whites as a justification for eliminating welfare and affirmative action. 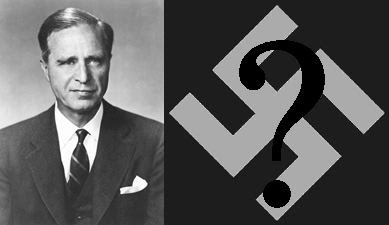 The Manhattan Institute is also the originator of G.W. Bush's "compassionate conservatism." Bush, who has presided over more executions than all other US governors combined, claims that next to the Bible, Chase Bank's Manhattan Institute has been the greatest influence on his ideas. G.W. Bush's father, George Bush, was a Rockefeller puppet, according to Ronald Reagan, and had numerous former Nazis involved in his presidential campaign. G.W. Bush's grandfather, Prescott Bush, managed Wall Street front companies that raised money for Hitler and shipped supplies to the Nazis. These companies were seized by the US government in 1942 under the Trading with the Enemy act.

The Rockefeller's art museum, the Museum of Modern Art, insists on displaying art seized by the Nazis from Jews on their way to the concentration camps. It recently got a $65 million dollar gift of NYC tax dollars from Mayor Giuliani at the same time he was cutting the budget for art education in NYC schools and asking the US Supreme Court to eliminate First Amendment protection for all visual art.

Chase Manhattan Bank's logo is a modified swastika. When you see or hear their ads about Chase: "The Right Relationship," think Hitler, Nazism and Auschwitz. Morgan Bank, the Swiss Banks that stole and hid Jewish bank accounts, and Chase belong together. They truly are, "the right relationship."

AP 9/12/2000: Chase Manhattan in Talks to Purchase J.P. Morgan. NEW YORK (AP) - Shares of J.P. Morgan & Co. surged nearly 10 percent Tuesday following reports it may be purchased by banking giant Chase Manhattan Corp. . . .The Wall Street Journal said the purchase price would be at least $30 billion . . . Most recently, speculation has centered on Deutsche Bank AG, though the Times said that those talks have been abandoned . . . Last month Credit Suisse Group agreed to pay $11.5 billion in cash and stock for Donaldson, Lufkin & Jenrette. Earlier this summer, Swiss banking giant UBS AG agreed to pay $11 billion for the Paine Webber Group. Chase Manhattan is the third-largest bank in terms of assets; J.P. Morgan is the fifth."

Daily News 12/7/98: Chase Banked On Nazis--Report "Chase National Bank--the precursor of today's Chase Manhattan Bank--allegedly helped the Nazis plunder Jewish property in France during World War II, according to a published report. The New York-based bank, controlled by the Rockefeller family, closed Jewish accounts even before the Germans ordered them to do so and did business with the Nazis while they were sending Jews to the gas chambers, Newsweek magazine reports in this week's edition. And while the US was at war with the Nazis, Chase also apparently helped German banks do business with their overseas branches, the magazine reported. Chase Manhattan is now the largest bank company in the US with more than $300 billion in assets . . . lawyers representing Holocaust survivors . . . intend to name Chase Manhattan to their lawsuit and are investigating the wartime role of another big US bank, J.P. Morgan, the magazine reported. While many other US businesses and banks closed down their Paris operations after France fell to the Germans, Chase National remained open and even thrived. The relationship between Chase and the Nazis apparently was so cozy that Carlos Niedermann, the Chase branch chief in Paris, wrote his supervisor in Manhattan that the bank enjoyed "very special esteem" with top German officials and "a rapid expansion of deposits," according to Newsweek. Niedermann's letter was written in May 1942-five months after the Japanese bombed Pearl Harbor and the US also went to war with Germany."

Daily News 12/24/98: Chase Named In Holocaust-Asset Suit. Two American banks were named in a class-action lawsuit yesterday that accuses them of collaborating with the Nazis to deprive Jewish depositors of their rightful assets. "They froze and blocked Jewish accounts during the period of the Nazi occupation in France, depriving Jewish families of the financial means to flee France," said attorney Kenneth McCallion, who filed the suit against Chase Manhattan Bank, J.P. Morgan, and seven French banks. . . . McCallion charges Chase's Paris branch-with full backing of its New York office--displayed "excessive zeal" in enforcing anti-Jewish laws and was held in "very special esteem" by Vichy authorities. Court papers also say Chase prospered under German occupation, nearly doubling its deposits between 1942 and 1944 from 27 million to more than 50 million French francs . . . Chase officials said in a statement that it has been in settlement talks with the World Jewish Congress for several weeks and that it was disappointed that an "unnecessary" lawsuit has been filed."

Newsday 8/18/89: Holocaust 'Reminder' Claimed. A concentration camp suvivor who witnessed the murders of his parents and five siblings at Auschwitz claimed that during questioning after his arrest on bribery charges he was placed before a blackboard bearing a Nazi slogan by former US Attorney General Rudolph Giuliani's office as part of an attempt to "break" him . . . Written on the blackboard was the German phrase "Arbeit Macht Frei." The slogan, "Work Shall Set You Free," adopted by the Nazi party, appeared over the gates at Auschwitz."

NY Times 6/12/2000: Bush Culls Campaign Theme From Conservative Thinkers. Gov. George W. Bush has said his political views have been shaped by the work of Myron Magnet of the Manhattan Institute.

Washington Post, Friday, September 16, 1988, Page A16, BEHIND SCENES, DAMAGE CONTROL HAS BECOME VITAL WEAPON FOR BUSH. When Republican presidential nominee George Bush took the lectern before the B'nai B'rith convention last week, a damaging news release was being distributed to reporters in the rear of the hall detailing new charges that members of a Bush ethnic coalition had made anti-Semitic remarks and promoted revisionist views of the Holocaust.

For a huge amount of meticulously documented material on Chase Bank and the Nazis see: The Secret War Against the Jews, by John Loftus and Mark Aarons, St. Martin's Press; Trading with the Enemy by Charles Higham, 1983; The Splendid Blond Beast: Money Law and Genocide in the Twentieth Century by Christopher Simpson, 1993; Blowback, by Christopher Simpson, Weidenfeld & Nicolson 1988; Old Nazis, the New Right, and the Repulican Party by Russ Bellant. Also see Philadelphia Inquirer article by David Lee Preston, "Fired Bush Backer One of Several with Possible Nazi Links," 9/10/88