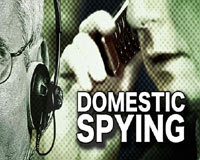 The Senate Judiciary Committee just voted 13-3 to authorize chairman Patrick Leahy (D-VT) to issue subpoenas for documents related to the NSA warrantless surveillance program. Sens. Arlen Specter (R-PA), Orrin Hatch (R-UT) and Chuck Grassley (R-IA) voted with the Democrats on the committee to authorize the subpoenas for any legal opinions and advice the Bush administration has received regarding the NSA program.

The Center on Democracy & Technology has released a list of the seven “most wanted surveillance documents.” See the full list here.

On May 21, the Senate Judiciary Committee made at least its ninth formal request for the documents, but the Justice Department continued its stonewalling. Leahy issued the following statement about today’s vote:

This stonewalling is unacceptable and it must end. If the Administration will not carry out its responsibility to provide information to this Committee without a subpoena, we will issue one. If we do not, we are letting this Administration decide whether and how the Congress will do its job. […]

Why has this Administration been so steadfast in its refusal? Deputy Attorney General Comey’s account suggests that some of these documents would reveal an Administration perfectly willing to ignore the law. Is that what they are hiding? […]

Whatever the reason for the stonewalling, this Committee has stumbled in the dark for too long, attempting to do its job without the information it needs. We need this information to carry out our responsibilities under the Constitution. Unfortunately, it has become clear that we will not get it without a subpoena. I urge the adoption of the subpoena authorization.

SAN FRANCISCO (AP) -- The Bush administration on Thursday asked a federal judge to toss out lawsuits seeking to unearth information about the U.S. telecommunications industry's alleged participation in a warrantless government eavesdropping program.

Lawyers for New Jersey, Vermont, Maine, Missouri and Connecticut argued that they are pursuing complaints by consumers that their privacy rights may have been violated if phone records were turned over to the NSA without their consent.

Department of Justice lawyers argued Thursday in U.S. District Court that such disclosures would harm national security and foreign affairs.

"It's plain what they are seeking is information about the intelligence-gathering of the NSA," Deputy Assistant Attorney General Carl Nichols told Judge Vaughn Walker.

New Jersey Assistant Attorney General Patrick DeAlmeida argued that state officials are simply investigating whether any local privacy laws or utility regulations were violated by the telephone companies. He said the government's national security claims are too broad and general as to preclude all state inquiry.

"We simply want that under oath so we can conclude the investigation," Taub said. "At this point the states are simply trying to find out if there has been any violation of state laws."

Verizon and several of the country's biggest telecommunications companies including AT&T Inc. and Sprint Nextel Corp. are among those being sued.

The five states served several telecommunications companies with subpoenas demanding to know what kind of customer information was turned over to the NSA as part of its anti-terror efforts. Those cases, plus about two dozen others brought by consumers, privacy advocates and others are all being heard by Walker, who earlier ruled that one case could continue despite objections from government lawyers that the lawsuit could jeopardize state secrets. The government's appeal of that ruling is scheduled to be heard in San Francisco in August.

President Bush confirmed in December 2005 that the NSA has been conducting warrantless surveillance of calls and e-mails thought to involve al-Qaida terrorists if at least one of the parties to the communication is outside the United States.

The administration contends the program is legal and necessary, but has been mum on whether purely domestic calls and electronic communications are being monitored, as any of the lawsuits allege.
http://hosted.ap.org/dynamic/stories/D/DOMESTIC_SPYING_LAWSUIT?SITE=WSPATV&SECTION=NATIONAL&TEMPLATE=DEFAULT&CTIME=2007-06-22-01-12-34
Posted by Alex Constantine at Friday, June 22, 2007