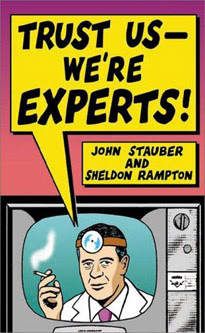 Led by Dr. Elizabeth Whelan, ACSH bills itself as:


WHOSE INTERESTS DOES ACSH SERVE?

"Who eats my bread dances to my tune." - Old German Proverb

ACSH is heavily financed by corporations with specific and direct interest in ACSH's chosen battles. Since it was created in 1978, it has come to the enthusiastic defense of virtually every chemical or additive backed by a major corporate interest. In many of these cases, investigative journalists already have exposed direct connections between ACSH and its funders. But in almost every instance, it takes little effort to discover which funder in the list below has a vested interest in supporting ACSH's message.

Everything Bad is Good Again

rBST (rBGH) Milk: In 1998 ACSH called an attack on milk from rBST-treated cows an unwarranted distortion of science. The report stated that milk from such cows will lead to elevated levels of a hormone called IGF-1 which in turn will cause increased risk of prostate cancer.

Food Irradiation: In the article "Irradiation best way to end E. coli threat," by Scripps Howard News Service in September 1997, Elizabeth Whelan is quoted as saying "the unpopularity of irradiation to date in the United States is not based in science, but is due to anti-technology advocates who circulate unfounded claims that it poses a health hazard." She makes no mention of the fact that scientists have come out against irradiation, but have been silenced by the popular media. Several of the ACSH funders would benefit if irradiation of food were a practice accepted by consumers. The way industry and the FDA have managed to sidestep the issue is to declare it safe, make the labeling of it obscure, and keep public awareness of it negligible.

Cholesterol: ACSH issued a report in 1991 stating that there is no proven link between heart disease and a diet high in fat and cholesterol.

Saccharin: According to a 1985 article in the Washington Post by Howard Kurtz, ACSH received funding from Coca-Cola, Pepsi, NutraSweet and the National Soft Drink Association, and attacked reports that saccharin is carcinogenic.

Global Warming: In its position paper on global warming, ACSH states that implementation of fossil-fuel restrictions could "weaken the global economic system, [and] increase the incidence of poverty-related illness worldwide..." This is a case of selective reasoning-choosing the facts that fit and discarding the rest. Mainstream scientists recognize that a primary effect of global warming would be an increase in poverty-related illnesses such as malaria, cholera and dengue fever -- diseases dependent upon warm, wet climates.

Love Canal: Dr. Elizabeth M. Whelan says, "Was there ever any real health problem at Love Canal? Yes, there was, in the sense that there was an enormous amount of media-induced stress placed on residents who were terrified that they and their children would become ill."

Alar: In many ways, ACSH's work on the Alar issue is exemplary of the way the group works. Chemical makers-with the assistance of industry front groups like ACSH-found a gold mine in keeping the decade-old Alar controversy alive. Although the chemical was banned by the government in 1991 and the EPA named it a possible human carcinogen, saying that "long-term exposure to Alar poses unacceptable risks to the public health," the American public generally recalls the issue as a case in which environmentalists were wrong. They are incorrect.

In a 1973 study, Alar, a chemical used to lengthen the amount of time that apples could be left to ripen on the tree, was found to break down into a product called UMDH that is 1,000 times more carcinogenic than Alar itself. UMDH is formed when apples are cooked to make applesauce or apple juice.

When environmental groups claimed that Alar was a danger, ACSH attacked the groups, maintaining the chemical was safe and the target of a media scare. Not surprisingly, ACSH receives funding from Uniroyal, the company that made Alar.

Over the last decade, ACSH has made the Alar controversy a prominent part of its hallmark "Facts Versus Fears" report. A review of more than 25 "unfounded health scares," including dangers associated with saccharin, hormones in beef and DDT, the report is a who's who of products manufactured by ACSH's funders.

ACSH's disinformation campaign on Alar has been alive almost since the controversy began; dozens of articles in papers from around the country have published articles on the so-called "health scare." Though one of ACSH's main points about the incident was that it had a devastating effect on the apple industry, even the Washington Apple Commission noted that only two to three percent of consumers still were concerned about the chemical just a year after the story broke.

Less than a year ago, ACSH and "Facts Versus Fears" even made it into the pages of the New York Times - twice. The first piece was summary of the report's highlights. The second was an official correction in which the Times named Uniroyal as an ACSH funder, and clarified that the Alar was pulled from the market by the company before an EPA ban could take effect.

Former U.S. Surgeon General C. Everett Koop's association with ACSH and Elizabeth Whelan is longstanding. In 1992, the pair joined forces in the same way they would years later in their partnership on the "blue-ribbon panel" on phthalates.

ACSH sponsored a Washington, DC, press conference on the third anniversary of the Alar controversy. Koop headed a panel of "experts" that claimed Alar never posed a health risk. According to an article in PR Watch, the Hill and Knowlton public relations firm persuaded Koop to write a statement that apples were safe.

Whelan and Koop teamed up again to denounce Diet for a Poisoned Planet, a book that warned against the use of pesticides and chemical residues in foods. That campaign was organized by Ketchum Public Relations before the release of the book. Lorraine Thelian, the director of the Washington office of Ketchum, sits on the ACSH Board of Directors. Thelian is an expert on "environmental PR work," and her office represents a number of ACSH funders. Koop issued a statement calling the book "trash."

On May 25 of this year, ACSH announced that it had joined forces with Koop's new Internet healthcare site, drkoop.com. From the release:

"The American Council on Science and Health (ACSH), a non-profit, consumer-advocacy organization is creating an exclusive health wire service for drkoop.com consumers. Guided by ACSH experts and written by experienced wire service journalists, the daily ACSH newswire will help people better understand the health stories they see on the news by adding the often-missing scientific perspective. This partnership with drkoop.com gives consumers, who are constantly bombarded with conflicting and often alarming health news, an unbiased, scientific analysis of the latest trends in health and medicine, as well as clarifications of health misinformation found in the mainstream press."

Before consumers or reporters rely on ACSH for an "unbiased" analysis, they should review the record on the real sources of funding and points of view.

A final word on the relationship between ACSH and its funders...

A 1992 memo from Whelan, referenced in a Consumer Reports expose, bemoans the loss of funding from Shell in a particularly revealing way:

Some current and past ACSH corporate and foundation funders:

From: Mark Gold
Posted by Alex Constantine at Saturday, June 30, 2007