PRINCE Andrew has sold his Berkshire mansion to a Kazakh tycoon 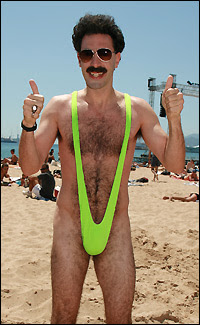 News of the World

PRINCE Andrew has sold his Berkshire mansion to a Kazakh tycoon for £6million, we can reveal. The buyer's famous countryman Borat was unavailable for comment, but his great admirer ROBBIE COLLIN has penned a few words on his behalf, for, as Borat might say, make benefit glorious readers of News of World.

JAGSHEMASH! I am delight to report that Prince Andrew has make sale of his beautiful home Sunninghill Park to a businessman from Kazakhstan.

One of my countrymens has bought the giant house for £6million and will move in as soon as it has been checked for gypsies.

The Kazakh businessman, whose name is not known, got a good deal. He originally make an offer of swap for Kazakhstan's biggest pubis harvesting factory—but this was reject.

Is Prince Andrew crazy? Kazakh pubis is best in world! We use to make everything, from scouring pad to children's sweater.

Plus he was going to throw in a family of freckle-faces who can produce red pubis, which is as valuable as diamonds.

It is not known where this Kazakh man got enough money to pay for house. Perhaps he is high up in famous Kazakh computer manufacturers Mikrozoft.

I used to work for them—I the one who paint the machines and remove dead birds from their pipes. Many British think that red-brick Sunninghill Park look cheap and tacky, like Tesco of 1980s.

But it remind me of the great Zailiysky Lunatic Asylum in Almaty, where for 20 tenge you can throw potatoes at the strange ones. The house has six reception rooms and 12 bedrooms, so there will be plenty of room for his goats. And all bedrooms are en-suite, so you need not make flush after doing a toilet for almost a fortnight. Nice!

There is also a secure compound at back for safe storage of vehicles and wives. And it is surrounded by a high wall for keep out the Jew.

I believe that Prince Andrew was once married to famous celebrity Sarah Ferguson —he is very lucky man!

In Kazakhstan we love Sarah Ferguson. We have a golden statue of her in the middle of Almaty. I would very much like to suck Sarah's toes!

I like her a lot more than my wife Oksana, who died last week. She was gathering sticks in the forest and a hunter mistake her for bear and shoot her.

I would also very much like to meet other royal wife, famous topless model Griff Rhys Jones. Prince Edward is a very lucky man too!

Both are luckier than his brother Prince Charles, who has followed ancient Kazakh tradition of marrying your favourite horse.

There are many nice things to do near to Sunninghill Park, in beautiful village of Sunningdale in Berkshire.

I hear that at nearby golf course, Prince Andrew has participated in many foursomes. Wa-wa-wee-wa!

I would very much like to try this because I once hear Prince Andrew talk of celebrating after getting his balls in the 18th hole. I very excite because in Kazakhstan our women only have three.

Plus there is lovely neighbour. Nearby estate called Harewood is 27 acres and costs £24million. It was bought two years ago by great Russian businessman Andrei Melnichenko, the world's 172nd richest man with a £2.3billion fortune.

He recently paid Jennifer Lopez £1 million to perform at a party for his wife Aleksandra. ...