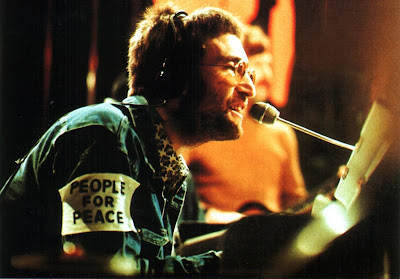 NOTE TO CIA: Please remove that glib, nasal soprano Jon Weiner and his limited hang-outs from my path. He's obstructing my efforts - with help from your Amy "Quisling-Free America" Goodman - and I need a clear road to explain how you murdered John Lennon in cold blood on a public street in broad daylight so collaorators like Goodman and Weiner could profit by lying about the circumstances of this particular homicide. I cherish the memory of John Lennon and swear that justice will be done, despite your shills in the media.

In fact, Mockingbird will fall, too. And so will your precious fascism. I promise. Want to stomp on the insect - again - don't you, CIA? You can kill me, I acknowledge this despite all past bumblings, but I will remain ...

For 40 years Yoko Ono has kept a silent dignity in the face of global vilification meted out by legions of Beatles fans.

But today, in an emotional interview, she reveals the last words her husband John Lennon uttered moments before he was gunned down on a New York street in 1980 by Mark Chapman.

“I said ‘shall we go and have dinner before we go home?’ and John said ‘No, let’s go home because I want to see Sean before he goes to sleep’,” Ono, 73, told Kirsty Young on ‘Desert Island Discs’.

Young then asked Ono if Lennon had said anything after he was shot, to which she replied in almost a whisper: “No.”

Ono, a conceptual artist, admitted that she would never be more than “the wife of an ex-Beatle”.

Choosing Edith Piaf’s “Je Ne Regrette Rien” as one of her discs, she added: “I regret nothing, too.”
http://www.independent.ie/entertainment/music/yoko-ono-breaks-silence-to-reveal-john-lennonrsquos-last-words-before-he-was-shot-701376.html
Posted by Alex Constantine at Friday, June 22, 2007