" ... FBI knew the men were innocent but did not inform state prosecutors at the time. ... " 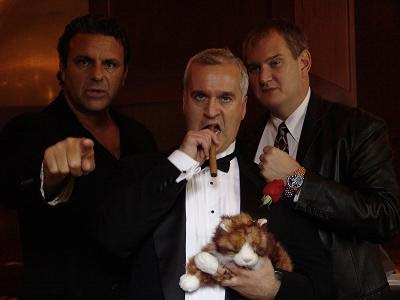 A federal judge today ordered the US government to pay more than $100m (£50m) in compensation to a group of men jailed for decades after being framed by a mafia hitman with the complicity of the FBI.

The FBI knew the men were innocent but did not inform state prosecutors at the time.

The men, two of whom died in prison, were set up by a Mob hitman, Joseph "The Animal" Barboza. A former boxer from east Boston, Barboza worked for the Patriarcas, a New England underworld family. He turned FBI informant while in jail for murder and was shot dead by the mafia in San Francisco in 1976.

The government argued that the FBI, which knew the wrong men were being accused, had no obligation to share its information.

The district judge, Nancy Gertner, said: "It took 30 years to uncover this injustice, and the government's position is, in a word, absurd. No lost liberty is dispensable. We have fought wars over this principle. We are still fighting these wars."

Peter Limone, Joseph Salvati and the families of the two who died in prison, Henry Tameleo and Louis Greco. had sued the federal government for malicious prosecution.

Mr Salvati and Mr Limone were exonerated in 2001, after FBI memos surfaced, showing the men had been framed by Barboza. The memos were made public during a justice department investigation into the FBI's relationship with the mafia in the 1960s.

Mr Salvati, aged 75, said: "Do I want the money? Yes, I want my children, my grandchildren to have things I didn't have, but nothing can compensate for what they've done."

The lawyers for the men said that Boston FBI agents knew Barboza lied when he named them as the killer of Edward Deegan in 1965. They said that the FBI was protecting one of its informants, Vincent "Jimmy" Flemmi. The lawyers said the FBI treated the four as "acceptable collateral damage."

Victor Garo, one of the lawyers for the men, said: "It was more important for the FBI to protect their informants than to protect innocent people who had families."

The FBI failed to disclose that agents listening in on an illegal bug had overheard Barboza and Flemmi seeking Patriarca's permission to kill Deegan several days before he was killed in an alley.

Bridget Lipscomb, a government lawyer, in the closing arguments, said: "The FBI did not initiate this prosecution, and there is no duty of the FBI to submit to state or local governments any of its internal files."

She said the FBI had shared some information about Mr Deegan's death with local police.